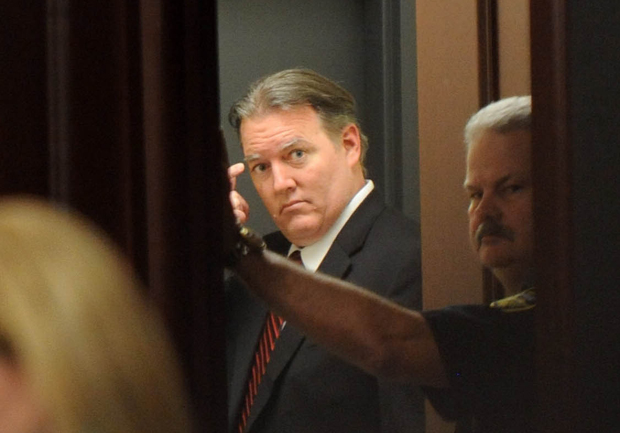 The man who shot and killed a teenager in Florida after an argument over loud music told his fiancee in a telephone call a month after his arrest that he was both the victim and the victor in the deadly encounter.

"You know I was thinking about that today, I was like I'm the f*** victim here, I was the one who was victimized," Michael Dunn said from jail in December 2012, a month after the shooting. "I mean I don't know how else to cut it, like they attacked me, I’m the victim. I'm the victor, but I was the victim too."

Dunn, a 47-year-old computer programmer, was convicted on Saturday of attempted murder for shooting into a car full of teenagers after the argument but the jury deadlocked on the most serious charge of first-degree murder. A mistrial was declared on the murder charge.

Dunn killed 17-year-old Jordan Davis in the parking lot of a Jacksonville gas station on the evening of Nov. 23, 2012. Dunn fired 10 shots at the red Dodge Durango that Davis and three other teens were riding in, hitting Davis three times. He died at the scene.

In the conversation with his fiancee, Rhonda Rouer, he also complained about being in a room by himself, but added: "But I guess it would be better than being in a room with them animals."

A short while later, he said, "I was in a room with three black guys."

"Two were kids and one was an old man," he continued. "And they asked what I was in for and I told them. And I gave them some of the details and they were like 'Straight up, that's what they get.'"

Audio of nine of Dunn's calls was released on Monday by the state attorney in Florida. All took place in December 2012 while he was in jail and were with Rouer or his parents, Phillip and Sandra Dunn. Also released was a letter that he wrote describing the shooting.

At first the teenagers turned down the music in their car, as he had asked, but then he wrote that he could hear one of the passengers in the back seat shouting that he should kill Dunn.

"He bends forward and picked something up with both hands," Dunn wrote. "As he's doing this, he says 'yeah-I'm going to f****** kill you!" and now I can tell what he's picked up, as he just laid a gun barrel against the window sill. I can see about four inches of the barrel sticking up and it looks thick enough to be a 12 gauge maybe a 20 gauge shotgun."

At first he was paralyzed by fear by the sight of the shotgun, he wrote.

"Something happened inside of me when he advanced towards me and my paralysis left me," he wrote. "Between fear, adrenaline and muscle-memory, I grabbed my pistol from the glove box. As I was doing so, I shouted, "You're not going to kill me you son of a b****!"

Dunn, who is white, testified that he fired in self-defense.

But no weapon was found in the SUV and Davis' friends said they did not hear him threaten Dunn. The state's medical examiner testified that the trajectory of Dunn's bullets into Davis' body showed that Davis was sitting down when he was shot.

Authorities said that Dunn became enraged about the music and the argument. One person walking out of the store said he heard Dunn say, "You are not going to talk to me like that."

The state attorney, Angela Corey, has said her office will seek a retrial of Dunn on the first-degree murder charge.

In another telephone call, Dunn's father told him of the shooting, "This thing is viral. It's all over the place. It's like that, you know, because he was a black kid."

"In a good way or a bad way?" Michael Dunn asked.

And his father warns him not to be seen smiling.

"You can cry for a half hour, crack one smile and they'll have you as a heartless son of a b**** that's smiling about it," he said.