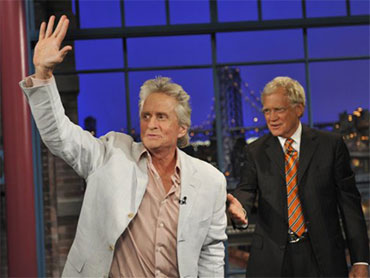 Michael Douglas says he faces an "eight-week struggle" against throat cancer but is optimistic about his chances for recovery.

During an appearance Tuesday on "The Late Show with David Letterman" on CBS, the Oscar-winning actor said he had just finished his first week of radiation and chemotherapy. That drew a surprised reaction from Letterman.

"You've never looked better to me, and this proves that you're a tough guy, for God's sakes," the talk-show host said, drawing cheers from the studio audience.

The disease was diagnosed three weeks ago, he said, although he had complained of a very sore throat earlier this year and had undergone testing that failed to find a cause.

Douglas, 65, who has two children with actress Catherine Zeta-Jones, said he enjoyed the summer traveling with his family before returning to the doctor. A biopsy found he had late, stage-four cancer, "which is intense, and so they've had to go at it," he said.

However, Douglas said, the cancer remains above the neck and that means expectations are good, with an 80 percent or better chance of recovery.

Asked by Letterman about his personal habits, he said he had smoked and consumed alcohol.

According to the National Institutes of Health, use of tobacco or alcohol are among the factors that put people at risk of developing throat cancer. Combining tobacco and drinking increases the risk.

Most throat cancer develops in people older than 50, with men more likely than women to get the disease, the NIH site says.

"Ahh, give me a hug," Douglas responded, and the two hugged warmly.

Douglas stars in the upcoming film "Wall Street: Money Never Sleeps," a sequel to "Wall Street" (1987), for which he won a best-actor Oscar.

But it was already a tough year for the star, Hill notes. In April, his oldest son, Cameron, began serving five years in prison for dealing drugs. Then, in June, his first wife, Diandra, sued him for half of what he'll make from "Wall Street: Money Never Sleeps," which opens this month.

His tumor is the size of a walnut and at the base of his tongue, People magazine Assistant Editor Sharon Cotliar told Hill. Cotliar spoke to Douglas for a cover story on his cancer battle.

Cotlair said Zeta-Hones, 25 years Douglas' junior, told her she finds it particularlaly unnerving how fatigued Douglas is now, since he usually has more energy than Zeta-Jones.