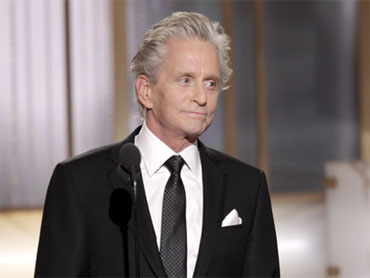 (CBS/AP) The clash between Michael Douglas and his ex-wife over his "Wall Street: Money Never Sleeps" earnings is back for another, nastier run in a New York court.

Lawyers for both sides traded barbs Tuesday over Diandra Douglas' continuing efforts to get half the Academy Award-winning actor's take from the 2010 movie.

A New York judge threw out her lawsuit in November, saying the dispute belonged in California, where the couple divorced in 2000 after 23 years together. Her lawyers requested that the judge reconsider on Tuesday.

With Diandra Douglas looking on, the actor's lawyer noted his recent fight with throat cancer and said his ex "should be ashamed of herself" for seeking more money when she's gotten more than $51 million from him in the divorce and her stake in some earnings afterward. Meanwhile, her lawyers brought up Douglas' purchase of a $5 million-plus home near New York and his children's private schools.

Leaving court, Diandra Douglas lamented the "mudslinging" she felt was directed at her.

"I've always behaved as a lady, and I always intend to do so in the future," said Diandra. "I think the facts speak for themselves."

The cancer survivor didn't make an appearance at court but his lawyer, Marilyn B. Chinitz, said his former wife's claim was meritless, and "she ought to get the message and move on."

The couple's lengthy, multimillion-dollar divorce deal gives Diandra Douglas a share of proceeds from projects related to work the actor did when they were married.

She stated that it should include last year's sequel to "Wall Street," the 1987 Oliver Stone film that won Douglas an Oscar for his role as an era-encapsulating financier who declared that "greed is good." The actor's camp says the divorce agreement doesn't apply to the second "Wall Street," which wasn't on the horizon when the couple split. Released in September, it grossed more than $100 million worldwide.

The divorce pact also specified that future money disputes would be resolved in Santa Barbara, Calif., and California courts are best suited to handle the mix of entertainment and state-specific divorce laws enmeshed in the deal, Manhattan state Supreme Court Judge Matthew F. Cooper wrote in his November decision.

But Diandra Douglas chose to pursue the claim in New York. The single mother of three under 8, says it would be difficult for her to travel to Santa Barbara for proceedings in the case, though she has a home nearby. The house went onto the market with a price tag of more than $20 million.

Though officially a Bermuda resident in recent years, Michael Douglas also has been based in New York lately. His ex-wife's lawyer, Nancy Chemtob, noted that he'd bought a home in suburban Bedford and can sometimes be spotted in pictures on the pages of the city's tabloids, taking his own children to their schools. He has two children with his current wife, Oscar-winning actress Catherine Zeta-Jones.

His lawyer called it distasteful to make a matter of his residency when he's been in the city to get treatment for his throat cancer.

The 66-year old star revealed his diagnosis in August. In January, he announced that his tumor was gone after months of treatment and lost 32 pounds in the process.

"Mr. Douglas is cancer-stricken, tragically, and (Diandra Douglas' team) has the audacity to imply that we misled the court" by initially saying he wasn't planning to live in in New York, Chinitz said. "He stayed in New York. We all know the reasons why."

Diandra Douglas, 54, told Harper's Bazaar magazine in an interview published in March that she tried to put the case on hold after learning of her former husband's illness, but his lawyers refused. Chinitz said Tuesday that they wanted to dispense with a case they thought baseless, so the actor wouldn't have to be concerned about it.

The case has been part of a difficult period for the "Romancing the Stone" and "Basic Instinct" star. In the months before he disclosed his cancer, his and Diandra Douglas' son, Cameron, was sentenced in April 2010 to five years in federal prison for dealing methamphetamine from a trendy Manhattan hotel.

Cooper didn't immediately rule on Diandra Douglas' request to revisit his decision. She also has filed a notice that she plans to appeal to a higher court.