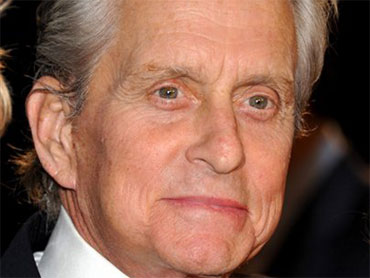 The actor was all smiles and all business, despite an ongoing battle with stage four throat cancer.

Shia LaBeouf, who co-stars with Douglas in the "Wall Street" sequel, said, "He's a wolf, and he has great support from his family; good strong group of friends. Cancer picked the wrong guy."

But in a recent interview with the Los Angeles Times, he spoke of a grueling battle with his disease.

The actor is undergoing daily radiation treatment for the next two months and expects he won't be able to eat or speak in just two weeks. Of his constant pain, Douglas says, "Sores start forming in your mouth, then lesions, and then you can't swallow."

Oliver Stone, director of the "Wall Street" films, has said of Douglas,"He's tired and it's hard and difficult, To some degree, he is buoyed by this recognition and he wants to do some good for this disease."

Douglas -- who reprises his role of Gordon Gekko in the "Wall Street" sequel, which opens Friday -- only learned of his illness in late July, and first spoke about it with David Letterman last month.

On the show, he said, "I've got cancer. Found out about it three weeks ago. I finished my first week of radiation and chemo."

Determined to fight his disease, Douglas' biggest fear is weight loss, which is especially dangerous for a person in his condition.

Actor Josh Brolin said at the premiere, "He's dealing with it extremely well."

Actress Susan Sarandon said, "That's the measure of a man when you get challenged like that, and he's been fabulous."

On "The Early Show," Bonnie Fuller, editor in chief of HollywoodLife.com, said Douglas "looked fantastic" at the premiere.

She said, "I saw all the pictures myself. He looked robust. He was strong. He didn't look in any way sick. The only thing is, he didn't talk much. He was protecting his voice."

"It can cause hoarseness," she said. "But the most important thing is really going to be the impact on his nutritional status because, with any treatment, radiation to the throat, it not only kills the cancer, but it kills or damages the healthy tissue around there, also. So, being able to swallow, being able to eat, being able to drink, will all be impaired. And his nutrition will suffer --(and) as anyone knows fighting a chronic illness, you need good nutrition. So that's going to be his major struggle."

But Fuller said Douglas looked determined at the film premiere last night.
She said, "He had said he wanted to walk the carpet. He's proud of his work in this film. And it's a great film. I saw it yesterday. He deserves to be proud. He commands the screen. He's just riveting."

"Early Show" co-anchor Maggie Rodriguez remarked, "He's gone through so much this year, not only this diagnosis, but his son is in prison. You know, he's got this lawsuit from his ex-wife going on. And yet he's keeping it all together. You ask his wife, and she says he is still very much the rock of (their) family."

Fuller replied, "That's right. You know, there have been photographs of him actually taking his daughter, who 7, to school every day. I think he's trying very hard to keep routine. The film is a lot about being a father. And I think that's extremely important to him. And, in fact, there's even some word out there that he may renew his marriage vows with Catherine for their 10th anniversary, coming up."

Douglas is fighting stage four cancer. What does that mean for his battle?

Ashton said," It's stage four out of four. There are four stages. Most people know, you want -- your best chance for cure comes with a lower stage. Basically, to be stage four, when you're talking about head and neck cancer, based on two criteria: Size of the tumor, larger meaning more advanced, and also whether any lymph nodes have been involved. He had said repeatedly that he has been given about an 80 percent chance of cure. So that is definitely good news. Likely means that no lymph nodes have been involved. But it is a large tumor."

Ashton added, "And your state of mind is so important when you're fighting cancer."

However, the risk factors are high for Douglas. Ashton explained that just being male increases the risk. Men, she said, are 10 times more likely than women to be inflicted with head and neck cancer. In addition, being over 50 years old increases risk. Douglas just turned 66.

"You can't control those things," Ashton said, adding, "Things you can control, smoking, drinking, and the human papillomavirus (HPV) is now implicated in a lot of head and neck cancers. Interestingly enough, though, … if you have HPV in your head and neck tumor you tend to do better with treatment. They tend to be more responsive to chemotherapy and radiation. So that's possibly a good thing."

"Let's hope all goes well for him," Rodriguez said. "Everybody is rooting for him."