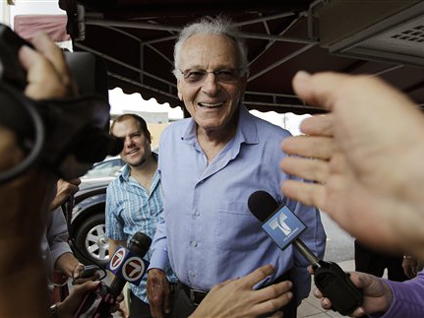 MIAMI - Mayor Carlos Alvarez was ousted Tuesday by voters angry over a property tax rate increase and salary raise for county employees in a county struggling to recover from the recession.

With 100 percent of precinct votes counted, 88 percent voted to oust the mayor, making Miami-Dade the most populous area, with more than 2.5 million people, ever to recall a local official. Just 12 percent of the 204,500 who cast ballots were in favor of allowing Alvarez to finish his second term, which ends in 2012.

Alvarez said he was confident the county's professional staff will work hard to ensure a smooth transition to a new administration.

"It has been an honor and privilege to serve this community for the past 35 years," Alvarez said in a statement. "The voters have spoken and a time of healing and reconciliation must now begin."

The county commission will most likely schedule a special election to fill the remainder of his term. The effort to remove Alvarez was led by billionaire car dealer Norman Braman.

"County voters have demonstrated by their ballots that they are tired of unaccountable officials, of being ignored and of being overtaxed in this very difficult recessionary time," Braman said at a news conference.

Alvarez maintained throughout the recall effort that raising taxes was necessary to fill a $444 million gap and avoid cuts to critical social services. He said those affected by the property tax increase had enjoyed an artificially low 3 percent annual cap on tax increases during the real estate boom, and that the last round of contract negotiations had authorized most of the employee raises.

Francisco Rodriguez, 58, a bus driver, said his property taxes increased by about $600 this year, leading him to cancel his health insurance. He voted to remove Alvarez.

There have been numerous recalls of state officials in recent years, but not any of a local government official in an area as big as Miami-Dade County. said Joshua Spivak, a recall expert and senior fellow at Wagner College in New York. The Los Angeles mayor was recalled in 1938, but Spivak said the population at that time was smaller.

Braman, a former owner of the Philadelphia Eagles professional football team, gathered twice the 51,000 signatures needed to recall the mayor. County Commissioner Natacha Seijas was also on the recall ballot and removed from office.