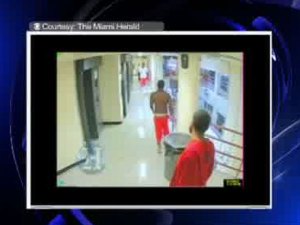 (CBS) MIAMI, Fla. - Corrections officers at a Miami prison are under investigation after all of the cell doors in a maximum security section of the Turner Guilford Knight Correctional Center opened unexpectedly leading to the ambush of an inmate who was forced to jump two floors to escape the attack, CBS Miami reports.

"We want to be able to trust our staff. It is suspicious," Corrections Director Tim Ryan told The Miami Herald.

Williams is reportedly behind bars in the maximum security wing of Turner Guilford Knight Correctional Center on charges of witness tampering in a murder trial.

The June 14 incident was the second time cell doors slid open unexpectedly since the installation of a $1.4 million dollar security upgrade, the station reports.

Corrections has reportedly blamed the triggering of the system's "mass release" feature on operator error. However, corrections officers insist no one pressed the release button and that the control panel went blank at the time of the incident.

Williams, through his lawyer, has criticized the jail for not moving fast enough to get medical attention after he was forced to jump.

"It's hard to imagine someone on the inside was not involved in helping facilitate this attack," Williams' attorney, J.C. Dugue, told The Miami Herald.