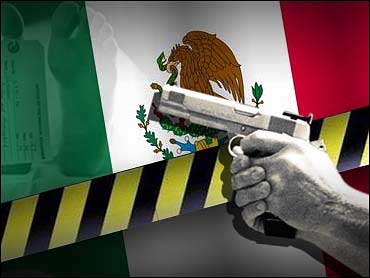 We take you to a place where kidnappings, torture, and even brutal beheadings have become common. We're talking about Mexico.

Two years ago, Mexico's President Felipe Calderon declared war on the country's powerful drug cartels - the main suppliers of cocaine, marijuana, and methamphetamine to the United States. In response to the government's assault, the drug cartels have been fighting back hard.

It's gotten so bad, a U.S. military report warned that Mexico could face "rapid and sudden collapse." How worried is the U.S. government about the war next door? 60 Minutes and CNN's Anderson Cooper interviewed the secretary of the Department of Homeland Security, Janet Napolitano, for this report, which first aired this past March.

The stakes are high, not just because Mexico is a key American ally and trading partner, but because the drug cartels are fighting to control areas right along the U.S. border, just miles from cities like San Diego and El Paso.

Asked if the violence in Mexico is a threat to U.S. national security, Napolitano told Cooper, "It is certainly something that is of major concern. It's our neighbor to the south. It's a major partner in many areas. So it's something, for example, that I, as secretary of Homeland Security, pay a lot of attention to."

There's a lot to pay attention to in Mexico: 60,000 Mexican military and police are fighting against the five major drug cartels which control lucrative smuggling routes into the U.S.

They've managed to arrest some top traffickers, but new and more ruthless leaders have filled the vacuum, battling both the government and each other. They're terrorizing the country with very public acts of violence.

In December, a group of Mexican soldiers was found with their heads cut off, and a note from traffickers warning "for every one of mine you kill, we will kill 10."

A decapitated man was left hanging from a bridge; his head was found in the town square. Last year alone, nearly 6,300 people were killed in Mexico's drug war - more than double the number the year before.

Cartels are also increasingly expanding into human smuggling, extortion and kidnapping. Smaller criminal gangs have also gotten into the game, turning Mexico into one of the kidnapping capitals of the world.

"We are afraid of getting in a car, getting in a taxi, walking in the street alone. Going by the hand with your child," Claudia Wallace told Cooper.

Wallace's 35 year old brother Hugo was kidnapped while on a date in Mexico City. A month after he disappeared, his mother, Maria Isabel got a ransom note with a picture of him wearing a blindfold.

Months later, police told her Hugo had been killed by his kidnappers. And they told her what happened next.

"They took my brother to the bathroom, went to Wal-Mart, bought a saw, an electric saw, and returned to the apartment and cut my brother. And put it in a black bag," Wallace said.

Kidnappers don't just target the rich - the poor are victimized as well. A 5-year-old boy whose parents had a stall in a market was kidnapped in October. When the kidnappers thought the police were on to them, they killed the boy by injecting him with acid.

Last summer, 150,000 people marched to voice their frustration over the rising violence. Hugo's mother, Maria Isabel, has become a vocal advocate for victims. But in Mexico today, that can get you killed.

Gunmen riddled her car with bullets last year. "I think that we're at a point in which if the government doesn't put all of its effort into this, the drug traffickers, the kidnappers, and organized crime will ultimately take control of the country," she told Cooper.

In some towns, they have already taken control. Back in February in the city of Juarez, cartels threatened to kill a police officer every 48 hours until the police chief resigned. After two murders he did. Juarez's mayor moved his own family to Texas.

Mexico's police are overwhelmed in part because drug traffickers have them outgunned. Mexico's Attorney General Eduardo Medina-Mora is helping lead the effort to break up the cartels.

"Half of what we seize, 55 percent are assault rifles. And this is what gives these groups this intimidation power. Over 17,000 assault rifles, throughout the last two years. Two thousand and 200 grenades, missile and rocket launchers. Fifty caliber sniper rifles," the attorney general explained.

It might surprise you to learn where all these guns are coming from. It turns out 90 percent of them are purchased in the US.

Asked if he blames the U.S. for not doing more to stop this flow, he told Cooper, "We believe that much more needs to be done. We need a much more committed effort from the U.S."

"There was an assault weapons ban in the United States for ten years. It expired in 2004. Would you consider asking Congress to reinstate that?" Cooper asked Napolitano.

"I haven't thought that far," she replied. "What I have worked on is working with customs, with ATF and saying "what do we need to do by way of identifying who is putting these unlawful gun into the hands of the traffickers who are using them to murder people. And what do we need to do to stop it."

It isn't just guns coming from the U.S. that's fueling Mexico's war: it's cash. According to estimates, drug trafficking brings in as much as $38 billion a year from the U.S.

"How much responsibility does the United States have in helping Mexico in ending this war?" Copper asked Medina-Mora.

"This is a shared responsibility," the attorney general replied.

"'Cause there's many in the U.S. who see this as a Mexican problem," Cooper pointed out.

To find out how cartels are smuggling cash and drugs so easily across the border, 60 Minutes decided to visit one of Mexico's most famous alleged traffickers - Sandra Avila Beltran. She's the subject of a bestselling book and there's even a song about her.

Beltran may not look like your typical drug lord, but when she was arrested after five years on the run, she was brought to prison under heavy security.

Mexican authorities denied our request to talk to her, but when we showed up on visiting day at the prison in January, we got in.

Beltran's accused of being part of a trafficking operation that smuggled cocaine into the U.S. and now faces extradition. She denies the charges, but certainly seems to know a lot about drug trafficking.

Beltran was born into a drug trafficking family, and two of her husbands were assassinated. Both were cops, allegedly working for cartels.

"In Mexico there's a lot of corruption. A lot. Large shipments of drugs can't come into the Mexican ports or airports without the authorities knowing about it. It's obvious and logical. The government has to be involved in everything that is corrupt," Beltran charged.

Wiping out government corruption is one of Attorney General Medina Mora's jobs, but even his office has been tainted: 35 members of his elite intelligence unit were accused of taking bribes from a drug cartel last fall.

"The former drug czar himself was accused of receiving I think it was nearly half a million dollars every month from drug cartels," Cooper remarked.

"Essentially because they have a tremendous economic power, and a tremendous intimidation power that comes from cash and weapons," he replied.

Mexican authorities are now trying to rebuild the federal police force from the ground up. They're using background checks, polygraph tests, and new technology to monitor what local police departments around the country are doing.

Many Mexicans believe their government is losing the war. But Medina-Mora insists the violence is a sign the cartels are weakening and becoming desperate.

"What is it that gives you hope, though? I mean…more than 8,000 dead in the last two years, corruption at all levels of government and the police," Cooper asked.

Mexico is extraditing more of its high level alleged drug lords to the U.S. and is beginning to receive some of the $1.4 billion the United States has committed to help Mexico fight its war. The majority of that money will go towards equipment and training. But Janet Napolitano, the head of Homeland Security, is prepared in case the violence spreads.

"We're in constant contact with law enforcement on both sides. And we have some contingency plans should it escalate and actually spill over into the United States," she told Cooper.

"There have been reports that the U.S. considered the possibility of having a surge on the border. Maybe even involving U.S. military personnel," Cooper remarked.

"Well, That would be, certainly a last resort. Because civilian law enforcement is obviously what would be called on first," Napolitano said.

The power of Mexico's drug cartels has already spread far beyond the border. In February, the Justice Department announced they had arrested more than 700 people in the U.S. connected to just one cartel.

Mexican traffickers are operating in some 230 American cities, according to the Justice Department, and they're now considered the number one organized crime threat in the United States.

"Right. Right. That's why I say every-- you know, the United States has a real stake in this. We have a stake in it-- at that level. That-- that they're selling drugs. These drugs are being distributed throughout our cities, our communities, our neighborhoods. So this issue in Mexico, this very brave battle that the president of Mexico is fighting, is something that every American has a stake in," she replied.

Asked if it affects all of us, Napolitano said, "Yes."

In recent months, the Obama administration has expanded its efforts along the order with an increase of personnel, screening technology, tracking devices, and intelligence gathering in the hopes of not only preventing drugs from coming into the U.S., but keeping cash and weapons from going out.

Exposing The Truth Of Abu Ghraib