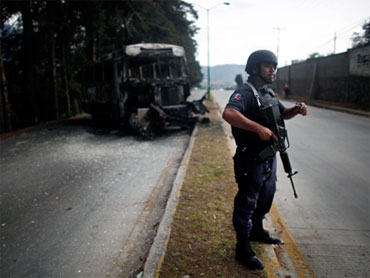 Gunmen killed 15 federal police officers Monday in separate attacks in two drug-plagued states, marking one of the bloodiest days for security forces since the government stepped up its fight with drug cartels.

Twelve officers died in an ambush near a high school in the western state of Michoacan, while assailants killed three more officers in a northern border state.

The latest in a series of mass slayings came as President Felipe Calderon defended his crackdown on traffickers in an essay on his office's website. He vowed he won't back down despite criticism that violence has only surged since he deployed thousands of troops and federal police in late 2006 seeking to crush the cartels.

"I'm clearly convinced that we would be in a much worse situation if we hadn't decided to fight criminals," Calderon wrote in the 5,000-word essay, which was published by several newspapers.

"If we remain with our arms crossed, we will remain in the hands of organized crime, we will always live in fear," the president said in the essay, which also blames Mexico's violence on the United States' voracious appetitive for illegal drugs.

In the ambush in Michoacan, Calderon's home state, officers riding in four pickup trucks were returning from a patrol when they came under fire in the city of Zitacuaro, the federal Public Safety Department said in a statement.

Ten officers died on the spot and two more on the way to a hospital. Thirteen other officers with wounds were taken to hospitals in Mexico City, the nearby city of Toluca and to the Michoacan state capital, Morelia, the Michoacan Public Safety Department said in a statement.

The federal safety department said several assailants were also killed or wounded, but officials did not provide a number.

In a separate statement, the department said gunmen killed three federal officers patrolling in the northern city of Chihuahua. One officer was wounded, the statement said.

Also Monday, three gunmen were killed in a clash with soldiers in Michoacan. Two soldiers were wounded, the state attorney general's office said. It said one of the attackers was detained.

The violence extended also to the northern Mexican state of Sinaloa, where prosecutors say 17 inmates were killed Monday in a prison riot.

A spokesman for the Sinaloa state prosecutors' office says all of the victims were shot to death. Investigators have found two pistols and an assault rifle in the prison in the Pacific coast city of Mazatlan. Two police officers guarding the prison were wounded in the Monday shootings, one seriously.

Brutal drug-gang violence has swept Michoacan, a state known for its picturesque colonial capital, beaches and Monarch butterfly sanctuary, and as the place where Calderon first launched his crackdown. The state is a stronghold of La Familia, a cartel known for beheading its rivals and making bold attacks on government security forces.

Among attacks on law enforcement, the bloodied and tortured bodies of 12 federal agents were found last year dumped along a highway in Michoacan.

Police did not immediately identify attackers involved in Monday's ambush or indicate whether they were suspected of being gunmen for La Familia. But the Public Safety Department did say the assailants picked up their wounded and dead and fled with them, a tactic often used by drug cartels.

The U.S. State Department has issued a travel warning urging U.S. citizens "to exercise extreme caution when traveling in Michoacan."

Nationwide, more than 22,700 people have been killed in drug violence since Calderon ordered the government offensive against cartels when he took office in December 2006.