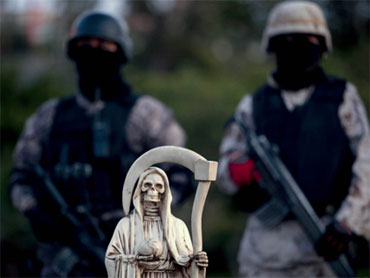 The attempts to blockade soldiers inside their bases - part of seven near-simultaneous attacks across two northern states - appeared to mark a serious escalation in Mexico's drug war, in which cartel gunmen attacked in unit-size forces armed with bulletproof vehicles, dozens of hand grenades and assault rifles.

While drug gunmen frequently shoot at soldiers on patrol, they seldom target army bases, and even more rarely attack in the force displayed during the confrontations Tuesday in the border states of Tamaulipas and Nuevo Leon - areas that have seen a surge of bloodshed in recent months.

The violence mainly involves a fight between the Gulf cartel and its former allies, the Zetas, a gang of hit men. The cartel - which has apparently formed an alliance with other cartels seeking to exterminate the Zetas - has been warning people in the region with a series of banners and e-mails that the conflict would get worse over the next two to three months.

Gunmen staged seven separate attacks on the army, including three blockades, Gen. Edgar Luis Villegas said Wednesday. He called the attacks "desperate reactions by criminal gangs to the progress being made by federal authorities" against Mexico's drug cartels.

Villegas said gunmen parked trucks and SUVs outside a military base in the border city of Reynosa trying to block troops from leaving, sparking a gun battle with soldiers. At the same time, gunmen blocked several streets leading to a garrison in the nearby border city of Matamoros.

Another gang of armed men opened fire from several vehicles on soldiers guarding a federal highway in General Bravo, in Nuevo Leon state.

Mexico's northern states are under siege from the escalating violence involving drug gangs.

The U.S. consulate in the northern city of Monterrey warned American citizens who may be traveling for Easter week about recent battles in the states of Nuevo Leon, Coahuila and Durango. The consulate said U.S. citizens traveling by road from Monterrey to Texas "should be especially vigilant."

One of the clashes between soldiers and gunmen killed two gunmen on the highway connecting Monterrey and Reynosa, which is across the border from McAllen, Texas.

Less than two hours before that shootout, Nuevo Leon Gov. Rodrigo Medina had assured citizens that authorities regained control over the state's highways.

"I've found the highways calm. We ask that if citizens have plans to go out and enjoy these vacations, they should do so," Medina said.

Also on Wednesday, authorities in the Gulf coast state of Tabasco announced that the nephew of one of Mexico's most-wanted drug gang leaders was captured together with a police chief accused of protecting a notorious cartel in a key port city.

He was arrest along with Daniel Perez, the acting police chief of Ciudad del Carmen, an oil hub in neighboring Campeche state. The statement alleged Perez received 200,000 pesos ($16,000) a month for protecting the Zetas.

The arrests come as the Zetas are under pressure from a bloody turf war with their former ally, the Gulf cartel. Authorities blame that fight for contributing to a surge of violence in Mexico's northeastern border states north of Tabasco and Campeche.

"He's an agent who had been with the police force long before we took over the town government," Escalante said. "We had given him our trust."

Last week, Tabasco Gov. Andres Granier warned that the arrests of several suspected Zetas over the past several months could stoke turf battles in his region. He asked the federal government to send troops.

Meanwhile, the Mexican government announced that federal police will take over the anti-crime campaign currently headed by the army in the violent border city of Ciudad Juarez.

The army deployment has come under criticism from those who say soldiers are not trained for police work, and complaints they conducted illegal searches and detentions. But perhaps more important is the fact that killings have continued apace, even with troops in the city across the border from El Paso, Texas.

An unspecified number of soldiers will remain in Juarez to help combat drug gang violence that killed more than 2,600 people last year, and 500 more so far this year in the city of 1.3 million.

Starting Thursday, "the Mexican army will start gradually transferring responsibility for public safety to civilian authorities, to federal authorities at the beginning and gradually to state and local" forces, the Interior Department said in a news release.

The statement said 1,000 federal officers will be added to the police deployment in the city, bringing the number of federal agents to 4,500.

The department said the change was part of a new strategy to focus on social programs as an answer to the continuing violence.

Elsewhere, four severed human heads were found early Wednesday in Apatzingan, a town in the western state of Michoacan. Residents found the heads, with eyes still blindfolded, lined up at the foot of a monument along with a threatening message, state prosecutors said.

In Morelia, the Michoacan state capital, police reported finding the bodies of three young men who had been shot to death. The bodies had messages stuck to their chests with knives, The contents of the messages were not released.

Police in the border city of Nogales reported finding the bullet-ridden bodies of three men, including a city transport official, on a rural road along with three burned-out vehicles.

Wednesday marked the beginning of Mexico's Easter Week vacation, and police in the Pacific coast state of Guerrero reported that gunmen had held up two motorists on the highway leading to the resort of Acapulco. The gunmen stole the victims' vehicles, but they were not injured.