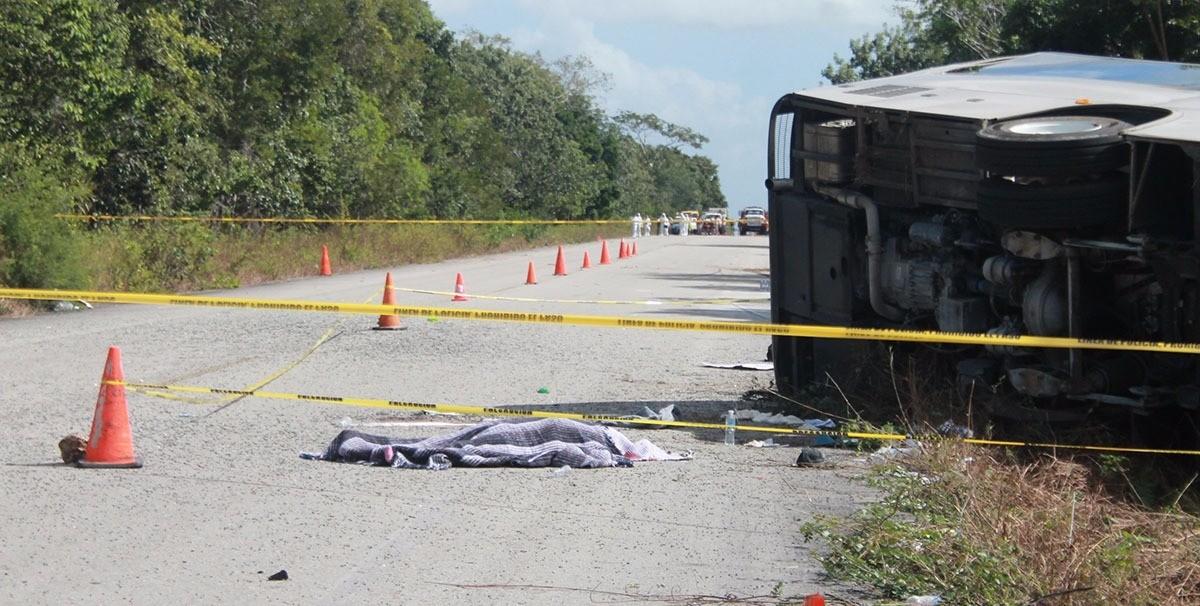 CANCUN, Mexico -- Eight Americans, two Swedes and one Canadian were among the fatalities of a bus crash in eastern Mexico, state officials said Wednesday.

The Quintana Roo state government said in a statement that the injured also include three Canadians, four Brazilians and four Americans. Two other Swedes were wounded and transported to the United States for treatment.

Officials had said Tuesday that seven others who were slightly injured had returned to their cruise ship after the accident.

A Mexican tour guide also died in the crash, and the bus driver was injured and taken into custody, the statement said.

Earlier, U.S. State Department spokeswoman Heather Nauert had confirmed that "multiple" Americans were killed in the crash and offered condolences to the victims.

The bus ended up on its side in vegetation along the two-lane road. Video taken after the crash showed some survivors lying on the pavement and others walking around. One body lay on the roadside covered by a white sheet or other object, as the crash scene was cordoned off with yellow police tape.

Miami-based Royal Caribbean Cruises said in a statement that passengers from two of its ships, the Celebrity Equinox and Serenade of the Seas, were on the bus. The company expressed its sympathies and said it was assisting with medical care and transportation.

The U.S. Embassy in Mexico City said the U.S. Consulate in Merida was ready to provide assistance.

Martin said investigators were working to determine the cause of the crash, which occurred as the bus was on its way to the ruins at Chacchoben, about 110 miles south of Tulum.

The Quintana Roo state prosecutor's office reported that the fatalities were 11 tourists, including one child, and a Mexican tour guide.

"When we went by it, it was pretty horrible. The bus, the front windshield was entirely out. Like, some people had fallen through it," said witness Carrie Vanrenterghem.

She was traveling with her daughters back from the ruins when she came across the crash site.

"They were just traveling like we were, for you know, the holidays," Vanrenterghem said. "It's just hard to imagine their lives are gone."

It said in a statement Tuesday night that seven injured tourists had returned to their boat while 13 remained hospitalized, six of them in Tulum and seven in the city of Chetumal, near the Belize border.

The dead were being transferred to the forensics service for identification and subsequent notification of consular authorities.

Chris Brawley, a passenger on the Serenade of Seas, was on a bus headed to the same Mayan ruins when they came on the scene minutes after the accident.

It was shortly after 9 a.m. and a convoy of buses from the cruise port at Mahahual was headed to Chacchoben, he said. They had been on the road for about 35 to 40 minutes before the accident.

Brawly said the sky was clear and the road was dry and he didn't see any sign of another vehicle being involved in the crash, which happened on a narrow, two-lane road with no shoulder or guardrail.

He said he did not see the crash, but "the bus clearly lost control somehow as there were swerve marks all over the road surface."

Brawley, of Haslet, Texas, said his ship departed Fort Lauderdale, Florida, on Friday for a seven-day cruise. They were in Roatan, Honduras, on Monday and were scheduled to be in Cozumel on Wednesday.

Michael Schuenemeyer, a minister from Cleveland, was on another bus that passed the crash about an hour later.

Tow trucks were lifting up the bus when they passed by, he said. "It was in pretty sad shape," Schuenemeyer said.

Costa Maya Mahahual, the bus company involved, said in a statement that in addition to the tourists, a guide and driver were aboard the bus.