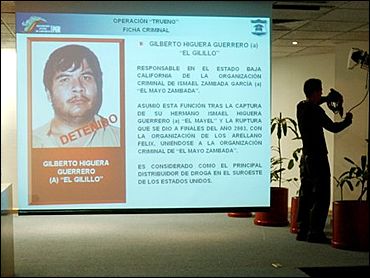 Mexican officials said Monday they have captured a man allegedly involved in shipping nearly half of the illegal drugs moved across the U.S.-Mexico border, the latest in a series of high-profile arrests.

Attorney General Rafael Macedo de la Concha said at a news conference that Gilberto Higuera Guerrero was arrested Sunday at a house in Mexicali, across the border from Calexico, Calif.

The U.S. State Department last year offered a $2 million reward for Higuera's capture, although that was well short of the $5 million it once offered for his alleged bosses at the time — brothers Javier and Eduardo Arellano Felix of Tijuana.

The split led to a series of bloody confrontations between the two gangs in the Tijuana area, Macedo said.

While the United States has asked for Higuera's extradition, Macedo said the prisoner would first be prosecuted in Mexico, where he faces nearly a dozen charges of drug trafficking, arms violations and organized crime.

Macedo said Higuera's capture resulted from intelligence gathered by both Mexican and U.S. officials, but he declined to give specific details.

Higuera's brother, Ismael, who also was a top lieutenant in the Arellano Felix gang, was arrested in 2000.

The Arellano Felix gang has been hit especially hard. Police in Mazatlan shot Ramon Arellano Felix to death in February 2000. His brother Benjamin was captured at his home in Puebla a few weeks later, dealing a major blow to one of Mexico's most violent drug gangs.

In 2003, the Gulf Cartel's leader, Osiel Cardenas, was arrested during a shootout in Matamoros, across from Brownsville, Texas.

Those arrests have led to a series of detentions of second-tier drug traffickers and to turf battles all along the border that have left dozens dead.