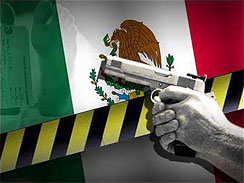 Police discovered six dead bodies in a cavern near the tourist resort of Cancun on Sunday, three of them cut open and their hearts removed.

"They were apparently tortured and their chests were opened to remove the hearts," Alor's office said later in a statement.

Three of the bodies had the letter "Z" carved on their abdomens - a possible reference to the Zeta drug gang, though officials did not make an explicit connection to cartel violence that has plagued many parts of Mexico.

More than 22,700 people have died nationwide in drug violence since late 2006, when President Felipe Calderon sent soldiers and federal police to battle the cartels.

Some of those attending the "quinceanera" celebration were also armed and returned fire, Guerrero state police said in a statement. Two partygoers and one attacker were killed, while three people were wounded.

Police have not yet determined a motive, but the area is plagued by drug trafficking.