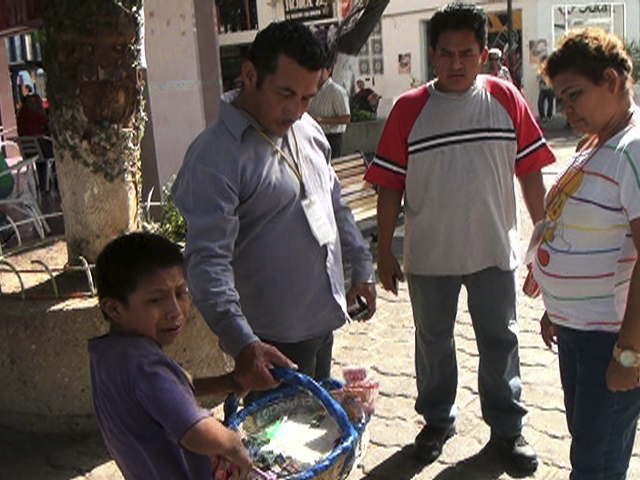 MEXICO CITY A 10-year-old Indian street vendor whose humiliation by a city inspector tugged on the heart strings of Mexicans after a video of it appeared on social media was showered Friday with attention and the offer of a scholarship.

The video shows the poor, sandal-clad Tzotzil boy selling candy, cough drops and apparently cigarettes out of a wicker basket in Villahermosa, the capital of the Gulf coast state of Tabasco. State officials say the boy, Manuel Diaz Hernandez, was trying to earn money to buy his own school supplies.

A city inspector, identified as Juan Diego Lopez, spots the boy, confronts him and takes several packs of cigarettes from his basket. It is prohibited in Mexico for minors to buy or sell cigarettes.

In the video, Manuel can be seen weeping inconsolably as the inspector forces him to take all the candy in his basket, handful by handful, and toss it on the pavement. The cost of the candy and cigarettes could well be more than the boy would earn with a week's work.

As the inspector walks off with the boy's cigarettes, another man steps forward to help him try to pick up the sweets, and Manuel collapses into a squatting position, covering his face with his arms, rocking back and forth and sobbing loudly. The encounter took place on Monday.

The video was viewed hundreds of thousands of times over the last few days, and on Friday the governmental National Human Rights Commission announced it would investigate the case. The city announced on Wednesday that it has fired the inspector.

It was the latest victory for social media in winning some measure of justice in Mexico. In recent years, social media have exposed a number of scandals and instances of mistreatment that often would have gone overlooked in the past.

"Any form of violence against children is totally unacceptable, especially when directed against Indians, who are one of the most vulnerable groups in the country," the rights commission said in a statement.

Street vendors in Mexico frequently sell single cigarettes to passers-by at twice their original price, for people who don't have the time or money to buy a full pack. Officials agreed that the punishment meted out to the boy for selling cigarettes was out of line, especially in the southeast, a part of the country where Indians were routinely enslaved a century ago.

The Tabasco state prosecutors' office said the boy's aunt, Maria Diaz Diaz, said she had brought Manuel to Villahermosa about 10 days earlier. She said the boy lives with his grandparents in the Tzotzil Indian village of San Juan Chamula, in neighboring Chiapas state, and wanted to work during his summer vacation to raise money for school supplies in the fall. Mexican children get free textbooks, but often have to buy their own pencils, paper and uniforms.

Tabasco state Gov. Arturo Nunez announced Thursday his administration would give Manuel and his family "a scholarship, as well as all medical and psychological help for the boy."

Lupita Santiago, a spokeswoman for the Chiapas state child welfare agency, said Manuel speaks only limited Spanish. His age is listed as 10, but in rural communities like his hometown births are often not registered until much later.

They boy, who appears short for his age, had returned to his village following the incident, apparently fearing retaliation by Villahermosa officials.

"The boy is doing well," Santiago noted. He didn't suffer physical harassment, but it was harassment."

The child welfare agency is also providing the boy "all necessary help," she said.

The Tabasco state prosecutors' office said Friday it had detained another municipal employee who participated in the incident and is investigating both workers on suspicion of abuse of authority and theft.