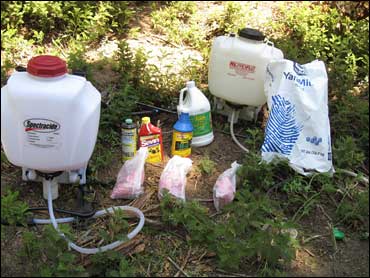 National forests and parks - long popular with Mexican marijuana-growing cartels - have become home to some of the most polluted pockets of wilderness in America because of the toxic chemicals needed to eke lucrative harvests from rocky mountainsides, federal officials said.

The grow sites have taken hold from the West Coast's Cascade Mountains, as well as on federal lands in Kentucky, Tennessee and West Virginia.

Seven hundred grow sites were discovered on U.S. Forest Service land in California alone in 2007 and 2008 - and authorities say the 1,800-square-mile Sequoia National Forest is the hardest hit.

Weed and bug sprays, some long banned in the U.S., have been smuggled to the marijuana farms. Plant growth hormones have been dumped into streams, and the water has then been diverted for miles in PVC pipes.

Rat poison has been sprinkled over the landscape to keep animals away from tender plants. And many sites are strewn with the carcasses of deer and bears poached by workers during the five-month growing season that is now ending.

"What's going on on public lands is a crisis at every level," said Forest Service agent Ron Pugh. "These are America's most precious resources, and they are being devastated by an unprecedented commercial enterprise conducted by armed foreign nationals. It is a huge mess."

The first documented marijuana cartels were discovered in Sequoia National Park in 1998. Then, officials say, tighter border controls after Sept. 11, 2001, forced industrial-scale growers to move their operations into the United States.

Millions of dollars are spent every year to find and uproot marijuana-growing operations on state and federal lands, but federal officials say no money is budgeted to clean up the environmental mess left behind after helicopters carry off the plants. They are encouraged that Sen. Dianne Feinstein, D-Calif., who last year secured funding for eradication, has inquired about the pollution problems.

In the meantime, the only cleanup is done by volunteers. On Tuesday, the nonprofit High Sierra Trail Crew, founded to improve access to public lands, plans to take 30 people deep into the Sequoia National Forest to carry out miles of drip irrigation pipe, tons of human garbage, volatile propane canisters, and bags and bottles of herbicides and pesticides.

"If the people of California knew what was going on out there, they'd be up in arms about this," said Shane Krogen, the nonprofit's executive director. "Helicopters full of dope are like body counts in the Vietnam War. What does it really mean?"

Last year, law enforcement agents uprooted nearly five million plants in California, nearly a half million in Kentucky and 276,000 in Washington state as the development of hybrid plants has expanded the range of climates marijuana can tolerate.

"People light up a joint, and they have no idea the amount of environmental damage associated with it," said Cicely Muldoon, deputy regional director of the Pacific West Region of the National Park Service.

As of Sept. 2, more than 2.2 million plants had been uprooted statewide. The largest single bust in the nation this year netted 482,000 plants in the remote Sierra of Tulare County, the forest service said.

Some popular parks also have suffered damage. In 2007, rangers found more than 20,000 plants in Yosemite National Park and 43,000 plants in Sequoia Kings Canyon National Park, where 159 grow sites have been discovered over the past 10 years.

Agent Patrick Foy of the California Department of Fish and Game estimated that 1.5 pounds of fertilizers and pesticides is used for every 11.5 plants.

"I've seen the pesticide residue on the plants," Foy said. "You ain't just smoking pot, bud. You're smoking some heavy-duty pesticides from Mexico."

Scott Wanek, the western regional chief ranger for the National Park Service, said he believes the eradication efforts have touched only a small portion of the marijuana farms and that the environmental impact is much greater than anyone knows.

"Think about Sequoia," Wanek said. "The impact goes well beyond the acreage planted. They create huge networks of trail systems, and the chemicals that get into watersheds are potentially very far-reaching - all the way to drinking water for the downstream communities. We are trying to study that now."