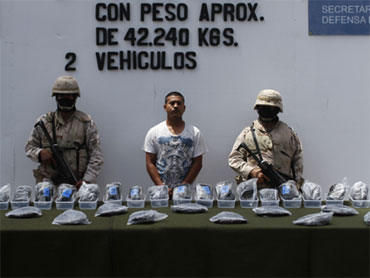 Mexican drug smugglers are increasingly peddling a form of ultra-potent heroin that sells for as little as $10 a bag and is so pure it can kill unsuspecting users instantly, sometimes before they even remove the syringe from their veins.

An Associated Press review of drug overdose data shows that so-called "black tar" heroin - named for its dark, gooey consistency - and other forms of the drug are contributing to a spike in overdose deaths across the nation and attracting a new generation of users who are caught off guard by its potency.

"We found people who snorted it lying face-down with the straw lying next to them," said Patrick O'Neil, coroner in suburban Chicago's Will County, where annual heroin deaths have nearly tripled - from 10 to 29 - since 2006. "It's so potent that we occasionally find the needle in the arm at the death scene."

Authorities are concerned that the potency and price of the heroin from Mexico and Colombia could widen the drug's appeal, just as crack did for cocaine decades ago.

The Latin American heroin comes in the form of black tar or brown powder, and it has proven especially popular in rural and suburban areas.

Originally associated with rock stars, hippies and inner-city junkies, heroin in the 1970s was usually smuggled from Asia and the Middle East and was around 5 percent pure. The rest was "filler" such as sugar, starch, powdered milk, even brick dust. The low potency meant that many users injected the drug to maximize the effect.

But in recent years, Mexican drug dealers have improved the way they process poppies, the brightly colored flowers supplied by drug farmers that provide the raw ingredients for heroin, opium and painkillers such as morphine. Purity levels have increased, and prices have fallen.

The greater potency allows more heroin users to snort the drug or smoke it and still achieve a sustained high - an attractive alternative for teenagers and suburbanites who don't want the HIV risk or the track marks on their arms that come with repeated injections.

"That has opened up heroin to a whole different group of users," said Harry Sommers, the agent in charge of the Drug Enforcement Agency office in St. Louis.

Among the drug's casualties was William Henderson, a 29-year-old welder from rural Missouri who died in his sleep in 2009, hours after snorting heroin. A bear of a man at 6-foot-1 and 300 pounds, he had tried the drug only a few times.

His wife recalled waking up to find the alarm buzzing. Her husband's body had turned blue, and his stomach was cold to the touch.

"I kept telling him, 'Will, you're late - get up!" said Amanda Henderson of Winfield, Mo., northwest of St. Louis. "But he wasn't moving, wasn't breathing. I called 911, but I knew it was too late." She and her three small boys were left destitute.

An increasing amount of the deadliest heroin appears to be coming from Mexico. Although the vast majority still arrives from overseas, Mexican dealers appear to be chipping away at the U.S. market.

As recently as two years ago, state and federal drug agents saw heroin arriving from Colombia, Asia and Mexico. But as the availability and quality of cocaine and methamphetamine have declined, Mexican smugglers have stepped up heroin shipments to the U.S.

Independent Mexican smugglers have the market largely to themselves because the major drug cartels only dabble in heroin, preferring to focus on locally grown marijuana and Colombian cocaine, according to a DEA official in El Paso, Texas. The agent spoke on the condition of anonymity, citing security concerns and his ongoing role in active drug investigations.

Heroin metabolizes in the body so quickly that medical examiners often cannot pinpoint the drug as a cause of death unless there is other evidence to back it up - say, a needle or a syringe found near the body. Also, many victims use multiple drugs and alcohol, so citing a specific substance is often impossible.

At the start of the decade, roughly 2,000 people a year died from heroin overdoses nationwide, according to records kept by the Centers for Disease Control. By 2008, the drug was blamed for at least 3,000 deaths in the 36 states that responded to records requests from the AP. Deaths from 2009 have not yet been compiled.

The AP contacted agencies in all 50 states, as well as officials in the District of Columbia and New York City, including medical examiners, coroners and health departments. The survey showed that heroin deaths rose 18.2 percent from 2007 to 2008, and 20.3 percent from 2006 to 2008.

Law enforcement officials and drug-treatment experts believe those statistics woefully undercount the actual number of deaths. And they fear the problem is getting worse: Seizures of heroin along the U.S.-Mexico border quadrupled from 2008 to 2009, from about 44 pounds (20 kilograms) to more than 190 pounds (86 kilograms).

In the Minneapolis-St. Paul area, more than 20 deaths were blamed on heroin in 2009. DEA analysis of heroin purchased undercover found the drug was nearly 60 percent pure - the highest average purity in the U.S. At the same time, the price was among the lowest.

"This is consistent with how crack cocaine was introduced in the 1970s, when it was a high-purity product sold at a low price," said Carol Falkowski, director of the alcohol and drug abuse division for the Minnesota Department of Human Services.

To hook new users, dealers are selling heroin cheap - often around $10 a bag. The new users included Billy Roberts, the 19-year-old son of a retired Chicago police officer. Last September, he slumped over dead of a heroin overdose at a friend's house.

John Roberts had moved his family to Will County when Billy was just entering high school.

"I thought I was moving away from problems like that," Roberts said. "These kids out here are being introduced to real serious drugs, dirt cheap, and they don't know how pure and dangerous they are."

Roberts now speaks to high school and civic groups about the dangers of heroin.

Independent Mexican smugglers like Jose Antonio Medina Arreguin pay the cartels for access to lucrative trade routes used to sneak drugs across the border and along U.S. highways.

Medina, also known as "Don Pepe," was arrested earlier this year in Mexico on suspicion of running a $10 million-a-month heroin smuggling business from the western Mexico state of Michoacan. With the permission of the area's powerful La Familia cartel, he is believed to have shipped as much as 440 pounds a month into the U.S. for street sales from San Diego to San Jose.

Glendale, Calif., often ranks among the safest cities of its size. But police are concerned about a growing heroin problem tied to Mexican street gangs from nearby Los Angeles. Gang members make the quick drive up Interstate 5 to deliver heroin straight to high school kids.

The trip up I-5 also leads to Oregon, where state Medical Examiner Karen Gunson said the heroin problem is worst in communities along the interstate. The state had 131 heroin-related overdose deaths last year - 42 more than three years earlier.

The dead simply didn't know the risks of the heroin they used, she said.

"We're seeing it sometimes 80 percent pure," Gunson said. "There's no FDA approval on this stuff. If you're using it every day, your chances grow and grow that it's going to kill you."

That's what happened to Nikki Tayon. A decade ago, she helped lead the high school softball team from Winfield to second place in the state. But it wasn't long after high school that she began using drugs such as marijuana and meth. A couple of years ago, she turned to heroin.

Last April, her mother, Sue Tayon, got a call from a ranger at Cuivre River State Park. Nikki's purse and cell phone had been found, and rangers were looking for her. Hours later came the gruesome news: Nikki's body was discovered in a ditch. She was 28.

She had overdosed on heroin that was 90 percent pure, her mother said. Police said her boyfriend panicked and dumped Nikki from the car. No charges were filed.

"I know she was doing it," Sue Tayon said. "But she didn't deserve to die this way."