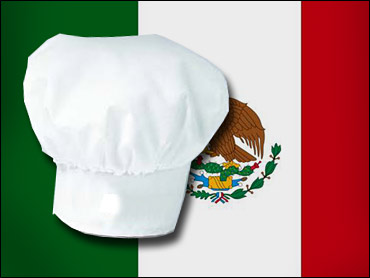 Ivy Stark knew from an early age that she wanted to be a chef. Lucky for us, she has graduated from the Easy-Bake oven to running one of New York City's most popular Mexican restaurants, Dos Caminos.

At Dos Caminos, chef Stark has been spicing things up with her modern twist on traditional Mexican cuisine.

Cinco de Mayo is next Wednesday, but we started the party a little early. We asked Stark to take our Chef on a Shoestring challenge and add some heat to your celebration by creating a three-course meal for four on our $30 budget,

Stark's menu as our Chef on a Shoestring: an appetizer of Green Grape Gazpacho; an entrée of Grilled Marinated Steak; and for dessert, Lemon Verbena Flan.

The holiday of Cinco de Mayo, the Fifth of May, commemorates the victory of the Mexicans over the French army at The Battle of Puebla in 1862. It is primarily a regional holiday celebrated throughout the Mexican state of Puebla, whose capital city is also called Puebla. But Cinco de Mayo is also celebrated in other parts of the country and in U.S. cities with a significant Mexican population.

Stark attended UCLA to study history before making her way to New York to attend the ICE's culinary arts program. After her graduation in 1995, she worked in the kitchens of celebrated chefs such as Mary Sue Milliken and Susan Feniger. She perfected her craft at such restaurants as Sign of the Dove, Normand Laprise's Cena and the Pan-Latin restaurant Ciudad.

In 1999, Stark worked for six months as a private chef for Ralph Lauren. She soon realized that Latin cuisine was her passion. When the executive chef position became available in 2003 at Dos Caminos, a Mexican restaurant in New York, Stark took it. She shares that title with Scott Linquist.

Tomatillos: Stark uses tomatillos in her green grape gazpacho. Tomatillos are also called tomate verde in Mexico, which means green tomato. They are considered a staple in Mexican cooking. The tomatillo is a member of the nightshade family, related to tomatoes. It now grows everywhere in the Western Hemisphere and is common in Texas gardens. The fruit of the tomatillo is green and about the size of a large cherry tomato, but can range in size from about an inch in diameter to the size of apricots. Tomatillos are covered by a papery husk, which can range from the pale green color of the fruit itself to a light grocery-bag brown. The husks are inedible and should be removed before use. Inside, a tomatillo is white and meatier than a tomato.

Mace: Chef Stark calls for mace in her dessert recipe. If you can't find it, you should use nutmeg instead. Found in the plum-sized fruit of the nutmeg tree, protectively covered by a thin-looking scarlet-colored shell. The flavor of mace is a little lighter and more delicate than nutmeg. Powdered mace can be used in doughnuts, poultry stuffing, sweet potato pie, oyster stew, and barbecue sauces. It can also be used with lamb chops and sausages. Mace is also used for soups and sauces, and is often found in wine mulling mixtures. It can add flavor to carrots, cauliflower, squash, Swiss chard, spinach and potatoes.

Lemon Verbena: Stark infuses the half-and-half in the flan recipe with lemon verbena, an herb that originated in South America. It has long, narrow pointed leaves with a pleasantly sharp lemon scent and flavor. The scent is quite different from other lemon-scented herbs and has been described as "lemon perfume." Lemon verbena was brought to Europe in the 17th or 18th century, and has been popular in France for many years. It is used to make tea, as a seasoning herb, and as a perfume and soap fragrance. It has recently become popular in the United States. Chef Stark says if you can't find lemon verbena, you can use lemongrass for this flan recipe. Like many other lemon-scented spices, lemon verbena is often suggested as a flavoring for fish stews and soups; it is also good with poultry. However, it's mainly used to flavor sweets, desserts and drinks.

Flan: Flan is the Spanish, Portuguese or Mexican version of the French dessert, creme caramel. Flan is a custard usually baked in a water bath and turned out of its mold onto a plate for serving. It is normally made with whole eggs and milk with a caramel coating. The typical favoring is vanilla but there are numerous variations that include almonds, pistachio, lemon and various other fruits.

Place tomatillos in boiling water for 5 minutes to soften. Remove and drain in a colander.

Served in chilled bowls sprinkled with and red grape halves.

Using medium heat, lightly toast the cumin seeds in a dry non-stick skillet until their aroma is released. This should take about two minutes.

Place the toasted cumin seeds in a blender. Add to the blender, the jalapenos, garlic, black pepper, and lime juice and puree until the cumin seeds are finely ground; then add the cilantro, olive oil and salt and puree until smooth. This mixture is the marinade for the meat.

Brush the meat with the marinade. Place the meat into a large plastic storage bag. Pour the remaining marinade over the meat. Refrigerate the meat for 24 to 48 hours. Heat a grill to very hot (or cook indoors in a grill pan). Cook the steak until seared on both sides, about three to four minutes on each side. Let the meat rest for about five minutes before slicing.

Slice the steak thinly on the bias. Serve the meat on a large platter.

Combine the red tomatoes and the red onion in a bowl. Drizzle a little bit of olive oil over them, and add a pinch of salt and black pepper. Add a few cilantro leaves. Toss well.

Place the sliced meat into the tortillas. Garnish with the tomato and red onion salad.

Chef's Note: You can warm up the tortillas by wrapping them in foil, and putting the wrapped tortillas on the grill while you're cooking the meat. You can also warm them up in an oven preheated to 250 degrees F. Wrap the tortillas in foil and place them on a baking sheet. Remove after 5 to 7 minutes. Serve warm.

Pre-heat oven 325 degrees F. In a pot over medium-high heat, heat the half-and-half until hot to the touch but not yet boiling. Remove from the heat.

In a small saucepan, heat 1/2 cup of the sugar on medium heat until it begins to dissolve and caramelize; stir gently. Take care to avoid burning the sugar. When the sugar has become a deep golden brown, pour into the ramekins, swirling the sugar around to evenly coat the bottom of the ramekin.

Return the lemon verbena mixture to the stove and heat and scald the half-and-half.

Lightly beat the eggs and yolks in a large bowl; mix in the remaining 1/2 cup of sugar and teaspoon of lemon zest.

Using a fine mesh strainer, strain the scalded half and half and slowly add it to the egg mixture, whisking gently. Add the salt, nutmeg (or mace), and vanilla extract. Pour mixture into the four ramekins.

Place the ramekins in a baking dish; pour warm water halfway up the side of the baking dish to make a water bath. Bake in the preheated oven for about 45 minutes, until set but still slightly jiggly in the center.

Remove the ramekins from the water bath; place on a wire rack to cool. Refrigerate until cold, about 2 hours, or overnight covered with plastic wrap. The flans can be made up to 2 days in ahead.

To serve, run small sharp knife around the edge of the flan to loosen. Turn over onto plate. Shake gently to release the flan. Carefully lift off ramekin allowing caramel syrup to run over flan. Repeat with remaining flans and serve. Serve with fresh berries if desired.