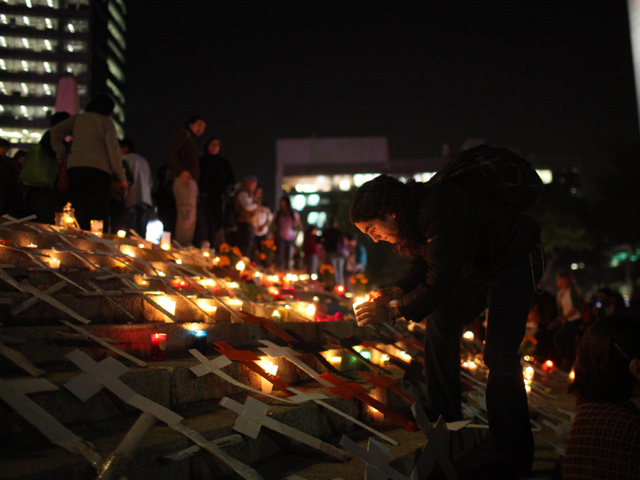 Police recovered the mutilated bodies before dawn off a toll highway at a shopping mall entrance in the heart of the Santa Fe district that's a haven for international corporations, diplomats and the wealthy. The heads and a threatening message were dumped a few yards away, Mexico City prosecutors said in a statement.

Local media published images of the charred car and reported that a note written on hot pink paper was signed by the drug gang Mano con Ojos, or Hand with Eyes. Mexican police had said the gang was weakened by the arrest of its leader, Oscar Osvaldo Garcia, in August.

The victims, a man and a woman in their 30s, had not been identified, prosecutors said. They said the SUV with license plates from neighboring Mexico state had been stolen.

The Centro Santa Fe mall where the charred car was found is one of the country's largest and most glamorous, housing high-end retailers like Coach, Prada, Hugo Boss, Saks Fifth Avenue and Mexican department store Palacio de Hierro. The dump scene was cleaned up so quickly that shoppers weren't even aware anything had happened.

The car was left only hours before Mexico City Mayor Marcelo Ebrard guided a tour of a bridge construction site 300 yards (meters) away. Ebrard spokesman Diego Gutierrez said there was nothing to indicate the bodies were a message to the mayor.

Mexico's sprawling capital has been something of a haven from the brutal cartel violence that has claimed thousands of lives along the U.S. border and in outlying states. But gangs have been fighting over an increasingly lucrative local drug market for more than a year, mainly in the capital's working class outer neighborhoods and suburbs.

The Santa Fe district has been spared much of that violence and managed to maintain its reputation as a manicured bubble built atop a former landfill on the western edge of Mexico City.

The financial district houses the Mexican headquarters of major corporations, Hewlett Packard and IBM among them, and Iberoamerican University, one of Mexico's top private schools. Modern, heavily guarded high-rises where wealthy Mexicans and foreigners live dot the hilly landscape.

But as the fight among splintering drug cartels intensifies, brazen attackers have reached even into the country's most guarded districts.

"If they don't put an end to this, it could become more frightening here," said Christian Falbi, a 24-year-old college student who lives in an apartment building within walking distance of the mall.

"We are talking about an area that is under 24-hour surveillance by police and private security and supposedly one of the safest in the capital and in the country, and yet they can act with impunity," Tirado said.

It was a regular day at the mall with dozens of cars parked in the lots and hundreds of shoppers visiting the jewelry shops, shoe and department stores.

Roberto Herrera, a 52-year-old salesman for a bottling company headquartered in a building across the street from the mall, wasn't surprised by the news.

"We have lived with this situation for a while and we are no longer shocked because this is what's been happening in Veracruz, Acapulco and Monterrey," said Herrera, who was having lunch with a co-worker at the T.G.I. Friday's restaurant inside the mall.

In October, the Mano con Ojos gang claimed responsibility for leaving two severed heads on a street across from the nation's top military base in Mexico City.

The gang was once part of the Beltran Leyva drug cartel, and authorities say it has killed dozens while trying to forcefully recruit local drug dealers to its ranks.

The figures indicate that three-quarters of all homicides in Mexico are now linked to the drug war.

The Attorney General's Office found one small consolation: "It's the first year (since 2006) that the homicide rate increase has been lower compared to the previous years."

There was a 70 percent jumped in drug-related killings for the same nine-month period of 2010 compared to January-September 2009, when 6,815 deaths were recorded.

The Mexican government had been periodically releasing the number of drug war dead, but it stopped a year ago when the number reached nearly 35,000. Mexico's freedom of information agency had said it would ask for an investigation if prosecutors didn't release the data requested by several journalists by Wednesday.