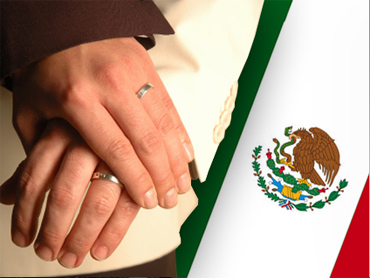 The Mexican Supreme Court ruled Thursday that a law allowing same-sex marriages in Mexico City is constitutional, rejecting an appeal by federal prosecutors who argued it violated the charter's guarantees to protect the family.

The justices' 8-2 ruling handed a legal victory to hundreds of same-sex couples who have been married in Mexico's capital since the groundbreaking law took effect March 4. It was the first such legislation in Latin America when it was approved six months ago.

"We are very happy," said Mexico City lawyer Leticia Bonifaz, who argued the capital's case. "It fell to us to carry to a conclusion a struggle that has taken a long time."

Justices who voted on the majority side stressed that while Mexico's constitution enshrines protection for families, it does not define what a "family" is.

"It does not appear to me to be unconstitutional," Justice Jose Gudino said during Thursday's session. "The concept of the family established in the constitution ... is an open concept."

The court still has to decide whether the ruling will affect states outside of the capital. It must also rule on the constitutionality of a provision of Mexico City's law that lets same-sex couples adopt children. It is expected to address that issue Monday.

Jaime Lopez Vela, a leader of the group Lesbian, Gay, Transsexual and Transgender, was among a group of activists who celebrated the ruling outside the court.

"Now we hope that the final ruling declares it all constitutional," he said, referring to adoption.

Rev. Hugo Valdemar, the spokesman for Mexico City's Roman Catholic Archdiocese, said "we regret this ruling because in our opinion, it affects the fundamental nucleus of the family."

Federal prosecutors had cited an article in Mexico's constitution that suggests - but does not state - that families are constituted by men, women and children. The article states: "Men and women are equal before the law. This protects the organization and development of the family."

Justice Guillermo Ortiz, who argued against the law, said "marriage is reserved exclusively for couples who can procreate, because one of the big issues of marriage is the protection of children."

But another judge, Jose Fernando Franco, argued that "procreation is not an essential element of marriage."

"Those who wish to procreate are free to do so, not only within marriage but in any way they see best, and this happens and can happen in heterosexual marriages, and those that are not, or among single persons," Franco said.

The justices who voted to uphold the law differed in their reasons why: Some stressed the constitution's protection of an individual's right to choose a marriage partner, and others the right of local legislatures to enact laws governing the issue.

Justice Luis Aguilar Morales argued against framing the ruling around the individual rights issue, something that might force other states to adopt similar measures.

"If Mexico City wants it a certain way, that does not necessarily mean that the rest of the states have to do the same," Aguilar Morales said. The issue will apparently be worked out in subsequent discussion and the writing of the final ruling.

Armando Martinez, president of a local Catholic lawyers' group, said his organization will be even more concerned if the court rules ultimately upholds the part of the Mexico City law that lets same-sex couples adopt kids.

"That would directly affect the rights of children," Martinez said. "We will seek impeachment hearings against any justices that vote in favor of adoption."

City authorities said that as of earlier this week, 320 couples had been married under the law: 173 weddings between men and 147 between women.

Argentina became the first country in Latin America to legalize marriage for same-sex couples with a law approved in July. Mexico City remains the only city in Mexico with a similar law.