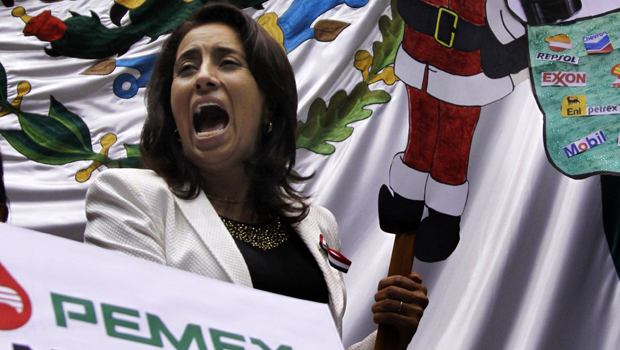 The 353-134 vote will allow the government to give private companies contracts and licenses to explore and drill for oil and gas, deals now prohibited under Mexico's constitution.

The final step, approval by 17 of Mexico's 31 states, is widely seen as assured.

The state-run oil company, Petroleos Mexicanos, or Pemex, has had a monopoly since the government took over operations of foreign oil companies in 1938, a move that has been revered ever since as a symbol of national sovereignty.

Opponents say they fear that multinationals, especially from the U.S., will once again regain the sort of domination they had over Mexico's oil before 1938. Mexico remains one of the top five crude exporters to the U.S., shipping more than 1 million barrels a day.

Leftist lawmakers tried to block discussion of the measure on Wednesday by seizing the main chamber of the House of Deputies, blocking access with chairs and tables.

When the debate was moved to another room, they dragged out discussion for 20 hours before the measure was finally approved.

One congressman of the leftist Democratic Revolution Party, Antonio Garcia Conejo, undressed during a speech Wednesday to dramatize his assertion the bill is a "plunder of the nation."

But most oil analysts had a positive view of the bill hashed out by President Enrique Pena Nieto's Institutional Revolutionary Party and the conservative National Action Party.

They say major change is needed to rescue Mexico's oil industry, where production has declined, and where Pemex hasn't had the finances or expertise needed to tap the country's vast deep-water and shale reserves.

While oil output has been rising in the U.S. and Canada, Mexico's production has fallen 25 percent since 2004 despite increased investment.

"The opening of Mexico's markets to put it bluntly, we believe is very good for the people of Mexico and the people everywhere in the world that uses energy," William Colton, Exxon Mobil's vice president of corporate strategic planning, said in a webcast before the vote Thursday. "It's win-win if there ever was one."

Supporters say a better energy sector could add at least a full percentage point to Mexico's annual growth rate, which was scaled back dramatically this year from a projected 3.5 percent to 1.3 percent. Backers also say it will be a boon to all three countries, the U.S., Canada and Mexico, in the North American Free Trade Agreement.

"We are going to be able to develop services and competencies in dealing with energy that are transferrable from one country to another," Thomas Donohue, president of the U.S. Chamber of Commerce, told The Associated Press. "They all have some differences in commodities and have their own regulatory systems, but all of it will be in the context of a lot oil, a lot of gas, a lot of coal and a fundamental ability to attract manufacturing, to improve supply chain and to drive the creation of jobs and economic growth."

Barclays Research, part of the Corporate and Investment Banking division of Barclays Bank, says the process of boosting production will be slow. Pemex estimates it needs more than $60 billion a year in investment to explore reserves, and currently gets about $24 billion.

"We have to recognize that this is an important effort in a historic sense. However, the challenges are huge because of the amount that has to be done to implement the reform as it is designed," said Michelle Michot Foss, head of the University of Texas' Center for Energy Economics.

The measure would allow contracts for profit- and production-sharing as well as licenses under which companies would pay royalties and taxes to the Mexican government for the right to explore and drill.

Private companies could post reserves as long as they specify in contracts that all oil and gas belongs to Mexico. The constitution would continue to prohibit oil concessions, considered the most liberal kind of access for private oil companies.

The bill also calls for mechanisms to prevent, detect and punish corruption in all new contracts, though the specifics must be worked out in what's known as the secondary laws.

It also appears to reduce the influence of the powerful oil union run by Carlos Romero Deschamps, whose family is famous for its ostentatious lifestyle.

Pemex has an estimated 155,000 employees, of which about 101,000 are unionized, according to Mexico's Center for Economic Investigation and Education.

Romero Deschamps, who is also a senator for Pena Nieto's Institutional Revolutionary Party, was initially in favor of the reform proposal, which barely touched Pemex or the union. But in a last-minute change approved by both houses, the bill effectively removed the union's representation on the Pemex board of directors.

Romero Deschamps walked out of the Senate and didn't vote.