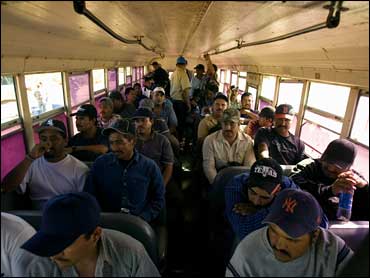 Mexican druglords are taking over the business of smuggling migrants into the United States, using them as human decoys to divert authorities from billions of dollars in cocaine shipments across the same border.

U.S. and Mexican law enforcement officials told The Associated Press that drug traffickers, in response to a U.S. border crackdown, have seized control of the routes they once shared with human smugglers and in the process are transforming themselves into more diversified crime syndicates.

The drug gangs get protection money from the migrants and then effectively use them to clear the trail for the flow of drugs.

Undocumented aliens are used "to maneuver where they want us or don't want us to be," said Alonzo Pena, chief of investigations for U.S. Immigration and Customs Enforcement in Arizona.

Gustavo Soto, a spokesman for the U.S. Border Patrol in Tucson, Arizona, said smugglers are carrying drugs along paths once used primarily by migrants. New fences and National Guard troops have helped seal the usual drug routes, and vehicle barriers are forcing traffickers to send more drugs north on the backs of cartel foot soldiers, he said.

"We have been able to seal many of the drug routes by adding technology and more agents," Soto said. "We're seeing a tremendous amount of drugs being seized."

The advent of drug-trafficking extortionists along the border may also be responsible for much of the drop in illegal immigration that U.S. officials have attributed more directly to better enforcement, Mexican officials and analysts say.

The new order became clear in December when heavily armed men stopped 12 vans packed with 200 migrants on a desolate desert road just south of the border. Local officials say they ordered everyone out, doused the vehicles with gasoline and set them ablaze.

Nobody was hurt, but the charred carcasses of the vehicles remain an unmistakable message to the thousands of migrants traveling north on the border's top people-smuggling route.

Since then, members of the powerful Sinaloa drug cartel have consolidated control of most of the main routes into Arizona, using teams of gunmen to set up the haggard border-crossers as decoys for U.S. security, U.S. and Mexican officials said.

Just south of the Arizona border, near the key people-smuggling waystation of Sasabe, armed men at a gas station stop vans full of migrants heading north, charging them $90 each and dictating when and where they can cross, migrants and local officials told the AP.

At times, the migrants are pooled and sent across in large numbers at one time of the day, clearing the route for a drug shipment a short time later. Smugglers also direct migrants away from successful drug routes in hopes of minimizing the manpower U.S. authorities assign to the area.

"The drug traffickers won't allow migrants to enter because the area will 'heat up' and the U.S. Border Patrol will be on alert," one local Mexican official said, speaking on condition of anonymity for fear of retribution. "They want control so they can 'cool off' the area and go in with their cargo."

While the Sinaloa cartel controls the Arizona border, its main rival, the Gulf cartel, has become involved in the people-smuggling business along the Texas border, according to Noe Ramirez, a Mexican deputy attorney general. Ramirez described the development recently as he announced the detention of five people who allegedly moved drugs and migrants into the U.S. for the Gulf cartel.

People-smuggling is only part of the cartels' new efforts to diversify.

The Mexican border is providing a less reliable profit stream for drug smugglers, analysts and law enforcement officials say. The U.S. seized 20 percent more cocaine and 28 percent more marijuana along the border in the past six months, compared with the same period a year earlier. And last month, Mexican police made the world's largest seizure of drug cash — $207 million neatly stacked inside a Mexico City mansion — allegedly for a methamphetamine factory that would have produced 3 million pills a day for the U.S. market.

The cartels now collect protection money from all manner of businesses, much like traditional U.S. mafia organizations. In many parts of Mexico, the cartels now dictate everything from who shines shoes on street corners to who is chosen as police chief.

President Felipe Calderon vowed two weeks ago to intensify his crackdown on the cartels in response to violence. Headless or tortured bodies turn up in public places nearly every day, many with notes threatening local authorities. On April 16 alone, some 20 bodies were discovered across Mexico, all believed to be victims of drug violence.

The border has become especially bloody, and some of the violence appears to be connected to people-smuggling. On Monday, police found the gagged and bullet-riddled bodies of two men near Sasabe. The wife of one of the victims, Enrique Sotelo Gonzalez, said he had complained of having to pay "fees" to armed men for the right to drive migrants to the border, according to state police.

In the 10 months since the arrival of National Guard troops, 271,195 people have been detained along the Arizona border, an 18 percent drop over the period a year ago, according to the Border Patrol.

"Now migrants are facing two sets of controls: the U.S. Border Patrol and criminals," a Mexican immigration official said on condition of anonymity. "But the criminals are scaring them away because they return to their towns and tell people how bad things were for them."

At the gas station in the town of Altar, drug traffickers collect their fees along the sandy, 60-mile road that migrants in vans and buses take to Sasabe before continuing north on foot, officials and migrants say.

Andrea Aguilar, a 41-year-old from southern Mexico, said she was stopped with 26 other migrants at the gas station, where the men demanded $45 from each migrant and another $45 each from their smuggler.

Her group was allowed to cross hours later, walking in the dark along sandy paths where the Border Patrol chased them down. She tried twice more by crawling under a metal fence and was sent back each time.

"After everything I lived through," she said at a migrant shelter on the Mexican side, "I won't risk my life again."