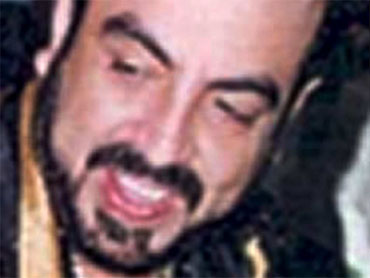 Two hundred Mexican Navy marines stormed an upscale apartment complex and killed a reputed drug cartel chief in a two-hour gunbattle, one of the biggest victories yet in President Felipe Calderon's drug war.

Arturo Beltran Leyva, the "boss of bosses," and six members of his cartel died in the shootout Wednesday in Cuernavaca, just south of Mexico City, according to a navy statement Thursday.

The body of one cartel member was found on the ground outside the third-floor apartment, after he apparently committed suicide during the shootout.

Cartel gunmen hurled grenades that killed one marine and wounded two others, one of whom is in serious condition, the navy said. Two women and one man were detained during the raid, and five assault weapons were seized.

An Associated Press reporter at the scene heard at least 10 explosions during the firefight, which residents said lasted at least 90 minutes. Witnesses said the raid began when marines rappelled down ropes onto the roofs of some of the apartment buildings at dusk.

Reporters were briefly allowed inside the apartment where Beltran Leyva's body still lay early Thursday; his skull and one arm were mangled by bullet wounds, and in one hand he clutched a large gold-colored medallion.

"First they were asked to surrender, but they didn't yield and they opened fire," said one of the ski-masked marines who participated in the raid, and who was not authorized to give his name.

President Felipe Calderon, speaking from the Copenhagen climate summit, said "this action represents an important achievement for the government and people of Mexico, and a resounding blow against one of the most dangerous criminal organizations in Mexico, and on the continent."

Calderon described Beltran Leyva as "one of the three most-wanted" drug suspects in Mexico. By most estimates, the other two - both still at large - are Joaquin "El Chapo" Guzman and Ismael "El Mayo" Zambada.

Calderon declared war on drug cartels when he took office three years ago, dispatching 45,000 troops to cities besieged by traffickers and violence, reports CBS News correspondent Bill Whitaker. Authorities have captured or killed a dozens of high-profile kingpins, but drug killings have skyrocketed - more than 13,000 dead since Calderon took office.

Residents of the apartment complex said the raid appeared carefully planned. Sailors went door-to-door before the gun battle to quietly evacuate residents to the gym.

Beltran Leyva is the highest-ranking figure taken down under Calderon, who has deployed more than 45,000 troops across Mexico to crush the cartels since taking office in December 2006. Mexico's navy often has been used in the battle as well. The offensive has earned Calderon praise from Washington even as 14,000 people have been killed in a wave of drug-related violence.

Beltran Leyva had narrowly escaped attempts to arrest him in recent months, including a Friday raid on an alleged drug cartel holiday party at mansion in the town of Tepotzlan, near Cuernavaca, where they killed three alleged Beltran Leyva cartel members and detained 11.

They also detained Ramon Ayala, a Texas-based norteno singer whose band was playing at the party, on suspicion of ties to organized crime. His lawyer, Adolfo Vega, denied Ayala had ties to the Beltran Leyva gang, saying the singer didn't know his clients were drug traffickers.

The last time Mexican authorities killed a major drug lord was in 2002, when Ramon Arellano Felix of the Tijuana Cartel was shot by a police officer in the Sinaloa resort of Mazatlan.

Beltran Leyva was one of five brothers from the Pacific coast state of Sinaloa who once worked side by side with Guzman, the leader of the Sinaloa Cartel. The brothers split with Guzman several years ago and aligned themselves with Los Zetas, a group of former soldiers hired by the rival Gulf Cartel as hit men. The split is believed to have fueled much of Mexico's bloodshed of recent years.

One of the brothers, Alfredo Beltran Leyva, was arrested in January 2008.

The U.S. Drug Enforcement Administration says the Beltran Leyva cartel has smuggled tons of cocaine into the United States, as well as large quantities of heroin.

The Mexican government had offered a $2.1 million reward for Beltran Leyva's capture.

U.S. officials say the Beltran Leyva Cartel has carried out heinous killings, including numerous beheadings of rival traffickers or kidnappers invading what the gang considered its turf.

The gang also has had great success in buying off public officials, including employees of the federal police and prosecutors, to protect their business and get tips on planned military raids.