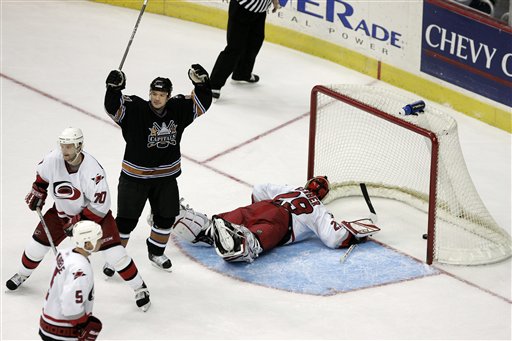 With Tim Wakefield and Bobby Jones nearly unhittable, it was fitting the only run scored on a play which no pitch was thrown.

Wakefield gave up just one hit, one walk and one balk in eight innings, but the New York Mets beat the Boston Red Sox 1-0 Saturday despite being baffled by his knuckler.

Jones (5-3) was just as sharp, allowing only three hits in eight innings.

It was the base running of Brian McRae, who scored on the sixth-inning balk, that gave the Mets a game even McRae said, "we had no business winning."

That's because their only hit in the first eight innings was Edgardo Alfonzo's clean single to left field in the second. They even had to scratch out the only run without benefit of a hit.

"I can't remember the last time I lost a game that was this frustrating," Wakefield (6-3) said after the Red Sox' second shutout loss in four days after going the first 55 games without one.

Home-plate umpire Terry Craft made the balk call when Wakefield stepped off the rubber with McRae on third in the sixth. Neither Craft nor third-base umpire Al Clark would change the call after getting an argument from Red Sox manager Jimy Williams. Craft said Wakefield brought his hands together and started his upward motion before stepping off the rubber.

"Either one would have been a balk," he said. "I had the best look of any umpire."

"I haven't looked at the tape. I don't want to," said Wakefield, who didn't dispute the call after the game.

McRae opened the sixth with a walk before Bernard Gilkey struck out. McRae got to second on a delayed steal and took third on John Olerud's groundout to first baseman Mo Vaughn.

With an 0-and-1 count on Butch Huskey, McRae broke for home, stopped, then ran back toward third. That's when the balk, Boston's first of the season, was called.

"I was looking at McRae because I didn't want him to steal home, but that's not why that (balk) happened," Wakefield said. "I still say one run shouldn't beat this club."

"What you're trying to do is disrupt him and maybe catch him off guard," McRae said. "I saw him do something different, but you don't know if the umpire's going to catch it."

That run gave New York its second win after a three-game losing streak as neither team managed a hit from the third through eighth innings. There were two singles in the ninth, Olerud's of Boston reliever Tom Gordon, and Vaughn's off New York closer John Franco, who got his 13th save.

The Mets finished with just two hits after hitting four homers in a 9-2 win over Boston Friday. The Red Sox ended up with four but had no runners past first base after the opening inning. The first two Boston batters, Darren Lewis and Reggie Jefferson, singled.

But Nomar Garciaparra grounded into his third double play in three games and Vaughn flied to right.

"It was a big pitch (to Garciaparra). First and second with no outs," Jones said. "You don't go out there thinking you're not going to score any runs."

The only other hit off Jones was Troy O'Leary's single in the second as the right-hander finished with six hitless innings, four strikeouts and three walks. Franco put the tying run on in the ninth, before ending the game by striking out O'Leary.

McRae was the only Met to get beyond first, and the balk was one of the few blemishes on a brilliant performance by Wakefield, who had a no-hitter through 6 2-3 innings against Kansas City May 10.

Wakefield is 0-2 in his last three starts overall after winning his previous six starts. Jones has won his last four decisions, while the Mets have won each of his last six starts.