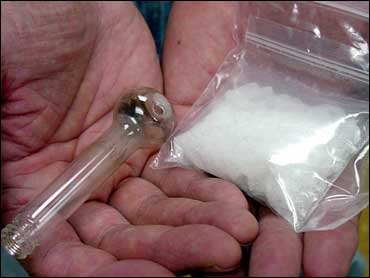 (CBS) Can crystal meth cause madness? Maybe so. Heavy use of methamphetamine is associated with an increased risk for schizophrenia, Canadian researchers say.

The researchers uncovered the link by examining the medical records of patients admitted to California hospitals between 1990 and 2000 for drug abuse or dependency.

They looked specifically at abusers of meth, marijuana, alcohol, cocaine, and opioid painkillers like OxyContin and Vicodin and compared these patients with a control group of appendicitis patients who didn't abuse drugs. Then the researchers looked at the number of patients in each group rehospitalized for schizophrenia up to 10 years later.

"We found that people hospitalized for methamphetamine dependence who did not have a diagnosis of schizophrenia or psychotic symptoms at the start of our study period had an approximately 1.5 to 3.0-fold risk of subsequently being diagnosed with schizophrenia, compared with groups of patients who used cocaine, alcohol or opioid drugs," study author Dr. Russ Callaghan, of Toronto's Centre for Addication and Mental Health, said in a written statement.

What explains the link between meth and schizophrenia? Dr. Stephen Kish, head of the center's human brain lab, said in the statement that one possibility was that repeated use of meth triggers latent schizophrenia by sensitizing the brain to dopamine. A brain chemical (neurotransmitter), dopamine is involved in motivation, pleasure, and reward - and is thought to be associated with mental illness.

The study was published online Nov. 8 in AJP in Advance, the advance edition of the American Journal of Psychiatry.

Methamphetamine - a.k.a. speed, meth, chalk, ice, crystal, or glass - is a white, odorless, bitter-tasting powder that can be swallowed, snorted, smoked, or injected. It's one of the most commonly abuse drugs in the U.S., with 1.2 million Americans age 12 or older saying in 2009 that they had abused meth at least once in the previous year.

The National Institute on Drug Abuse has more on methamphetamine.