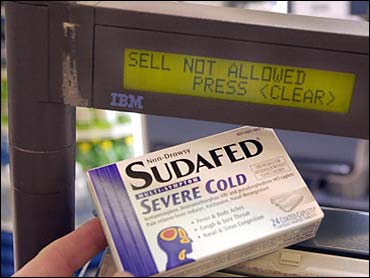 An association representing more than 36,000 pharmacies is issuing guidelines for possible federal legislation to restrict sales of cold medications containing a substance often used in the illegal manufacture of methamphetamine — or "speed."

Pseudoephedrine, a main ingredient in a number of over-the-counter drugs like Sudafed, Nyquil and Sinutab, can be extracted by boiling down the cold medicines; toxic chemicals are then used to turn the substance into highly concentrated meth.

The National Association of Chain Drug Stores, moving to avoid a hodgepodge of state laws, is calling for an overarching federal law that would require that such products be kept behind the pharmacy counter and sold only by a licensed pharmacist or pharmacy personnel.

The guidelines also suggest that drugstores be required to keep written or electronic logs of all pseudoephedrine purchases to assist law enforcement efforts.

"These principles strike a balance between keeping valuable products available to our customers and combating dangerous, illegal practices," Craig L. Fuller, the group's president and CEO, said in a statement Sunday.

In January, a dozen Republican and Democratic senators announced legislation to put drugs containing pseudoephedrine behind the counter. The drugstore association opposed that bill, arguing it would create unacceptable barriers for regular customers.

Now, however, "It's time for a federal solution," said Mary Ann Wagner, vice president for pharmacy regulatory affairs at the association.

Wagner said companies that run pharmacies in different states have to deal with a variety of laws regarding pseudoephedrine sales. Six states allow only pharmacies to sell drugs with pseudoephedrine; seven others make retailers lock up the products or sell them from staffed counters. Legislatures in 22 states are considering similar restrictions.

"There's got to be a standardized way to do this," Wagner said.

The Drug Enforcement Administration reported that more than 7,000 meth labs were dismantled nationwide in 2003.

According to the White House Office of National Drug Policy, meth is a highly addictive stimulant. Chronic abuse can lead to psychotic behavior, including intense paranoia, hallucinations and out-of-control rages.

All seven companies are members of the drugstore association, along with nearly 200 other chains.