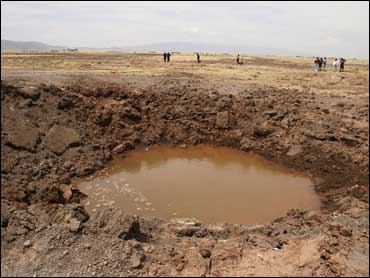 A fiery meteorite crashed into southern Peru over the weekend, experts confirmed. But they were still puzzling over claims that it gave off fumes that sickened 200 people.

Local residents told reporters that a fiery ball fell from the sky and smashed into the desolate Andean plain near the Bolivian border Saturday morning.

Jose Mechare, a scientist with Peru's Geological, Mining and Metallurgical Institute, said Wednesday that a geologist had confirmed that it was a "rocky meteorite," based on the fragments analyzed.

He said water in the meteorite's muddy crater boiled for maybe 10 minutes from the heat and could have given off a vapor that sickened people, and scientists were taking water samples.

"We are not completely certain that there was no contamination," Mechare said.

Local resident Marco Limachi said seven police officers who went to investigate the meteorite were among those suffering health problems, reported La Republica. He said the officers had been taken to the Desaguadero Hospital, where they were given oxygen and liquids for re-hydration.

Jorge Lopez, director of the health department in the state where the meteorite crashed, told The Associated Press on Tuesday that 200 people suffered headaches, nausea and respiratory problems caused by "toxic" fumes emanating from the crater, which is some 65 feet wide and 15 feet deep.

But a team of doctors who reached the isolated site said Wednesday they found no evidence the meteorite had sickened people.

Doctors told an Associated Press Television News cameraman at the site that they had found no sign of radioactive contamination among families living nearby. But they said they had taken samples of blood, urine and hair to analyze.

Peasants living near the crater said they had smelled a sulfurous odor for at least an hour after the meteorite struck and that it had provoked upset stomachs and headaches.

But Jose Isisuka, a geologist for the institute who was studying the crater, said he doubted the reports of a sulfurous smell.

Modesto Montoya, a member of the medical team, was quoted by Lima daily El Comercio as saying fear may have provoked psychosomatic ailments.

"When a meteorite falls, it produces horrid sounds when it makes contact with the atmosphere," he told the paper. "It is as if a giant rock is being sanded. Those sounds could have frightened them."

Justina Limache, 74, told El Comercio that when she heard the thunderous roar from the sky, she abandoned her flock of alpacas and ran to her small home with her 8-year-old granddaughter. She said that after the meteorite struck, small rocks rained down on the roof of her house for several minutes and she feared the house was going to collapse.

Meteor expert Ursula Marvin said that if people were sickened, "it wouldn't be the meteorite itself, but the dust it raises."

A meteorite "wouldn't get much gas out of the earth," said Marvin, who has studied the objects since 1961 at the Smithsonian Astrophysical Observatory in Massachusetts. "It's a very superficial thing."

Three geologists from Peru's Geophysics Institute are expected to report on the incident on Thursday.

Hernando Tavera, a geophysicist at the institute, said similar cases were reported in 2002 and 2004 elsewhere in southern Peru but were never confirmed as meteorites.