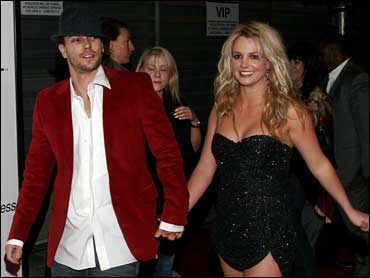 Pop singer Britney Spears filed for divorce from her dancer-turned-rapper husband, Kevin Federline. But Wednesday, he hit back with papers of his own, matching her request for sole custody of their two sons and asking for lots of money.

Divorce lawyer Nancy Chemtob says she thinks the divorce is about to become nasty, but doesn't think Federline will succeed in getting custody of the children.

"He's asking for sole custody, which is sole physical custody and sole legal custody, which would be sole decision-making for the children without her consideration," Chemtob, who has worked with celebrity clients, told The Early Show co-anchor Rene Syler Thursday. "I don't think he will get that. I believe it has to be a financial ploy."

Chemtob said she heard the prenuptial agreement says Federline will get $300,000 for each year of marriage, or $10 million.

"There is an ironclad prenup agreement and he's probably locked into it," she said. "Everybody is speculating it's $10 million and the way to get this out of the public eye, which I'm sure Britney would love to do, is to say, 'Here's money, go away.' "

According to Chemtob, the public usually learns the details of a high-profile divorce only when there is a huge disparity in the partys' incomes, as is the case with Heather Mills and former Beatle Paul McCartney.

"Divorce documents are usually sealed, so if they're out there, someone leaked them," she said.

Federline received news of the divorce via test message when he was shooting in Toronto for MuchMusic, a Canadian cable TV station, while he was still proclaiming love for his wife and kids.

"She really loves me," he told MuchMusic on Monday. "She's my No. 1 fan … I've been away from the kids for over a week and it's killing me inside."

The news hit Federline hard. Footage from MuchMusic shows him visibly upset. He couldn't finish his steak dinner and asked to take a half-hour break, during which he removed his microphone.

"He had no idea that Britney was going to be filing," Linda Masserrela, West Coast editor of In Touch Weekly, told The Early Show correspondent Sandra Hughes.

Masserrela also said the marriage had been rocky from the start.

"The day they got married, a week afterwards Britney was threatening divorce," she said.

Some say the disparity between their careers weighed on the marriage.

"He's a slacker and he wasn't enhancing her life," said Harvey Levin, managing editor of TMZ, the Web site that broke the news about the divorce.

Federline acknowledged the problem in an interview with CNN Headline News last week.

"I want to provide for my family just as much as my family provides for me," he said.

Moreover, the marriage has been characterized by a series of embarrassing incidents that made the public question Spears' parenting skills. It all makes for a messy situation, and the chances that this will be resolved quickly are slim, Chemtob said.

"Unless Britney is smart, steps up to the plate and realizes this will hurt her career for all of the allegations — how many times can people repeat she drops a baby on her lap? — it's not going to look good in front of a judge," Chemtob said. "What matters is the best interests of the children."

Theirs is just the latest in a string of high-profile divorces in which the woman out-earned her husband. Recently, Oscar-winner Reese Witherspoon announced she's divorcing Ryan Phillippe. Earlier this year, two-time Oscar-winner Hilary Swank dumped her husband, Chad Lowe.