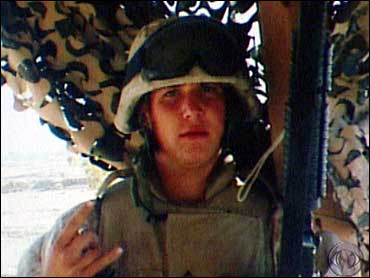 Not a lot of message-in-a-bottle stories come out of Central Wisconsin, mainly because there's not a lot of ocean there. But one recently did surface on a lake, CBS News correspondent Steve Hartman reports in this week's Assignment America.

That was all he wrote — but it was enough.

"Josh Baker. Everyone knows that name," says Leidel. "He's like the town hero."

Josh Baker grew up in White Lake, Wis. He was a precocious kid, and his curiosity got him into a lot of mischief, though his warm smile got him out of most of it. The day he wrote that note, for example, his mom, Maggie, still remembers exactly where he got the bottle.

"I came in one day and the whole house smelled like vanilla," Maggie says.

Ten-year-old Josh threw the vanilla bottle — with the note — into White Lake, and the years passed by. By 18, Josh was a Marine. By 19, he was fighting door to door in Fallujah.

While in Iraq, Josh got lots of support from his hometown. Georgia Heistad, the school secretary, was one of many people who put together care packages.

"I don't have a son. I only have a daughter. But I tell you, he would be my model son — everybody's," Heistad says.

That's why everyone says the day Josh Baker finally came home was one of the happiest days ever — and one of the saddest days ever was the day when, just a few months later, he died in a car crash.

Josh's funeral came and went, but the depression had sunk in deep. That's when the bottle surfaced.

"He wanted us to find this," his friend Steve says. "He probably thought that was awesome."

"It's just like what Josh would do," Heistad adds.

Most everyone is convinced it was a sign, especially Josh's mom, who had basically shut out the world.

"When that message came — and I don't care how hokey it sounds, this is the truth — that was Josh saying 'snap out of it. Mom. I'm here. I'm OK,'" his mother says.

Maggie says she did snap out of it and is now refocused on raising the two kids she still has at home. Although it's obviously still hard for her to talk about, Maggie says it's nice to know somebody's listening.