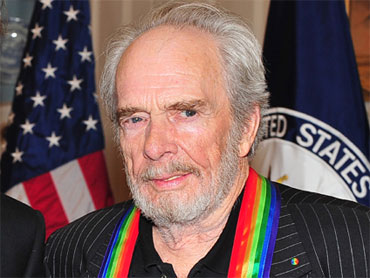 Each year The Kennedy Center Honors awards five Americans for their lifetime of achievement and excellence in the arts. "The Early Show" continued our series profiling this year's honorees with the country music legend Merle Haggard, who recently sat down with Julie Chen.

Known as "the poet of the common man," 73-year-old Merle Haggard remains one of the most influential artists in country music.

Oprah Winfrey Opens Up About Ending Her Show

For over 50 years the lyrics he's written haven't been fancy, but they've been honest.

Chen asked, "What would you say is the message in your songs?"

Haggard replied, "One word: truth. No matter how bad it hurts."

Haggard has always written about his own life, often reflecting on the loneliness and loss of his childhood.

Haggard said, "I was a very happy child until my father passed away."

His father's death cast a shadow over everything. With just his guitar, he ran away on freight trains and had run-ins with the law.

"Is it true that you spent more time in juvenile hall than in school?" Chen asked.

But soon life caught up to him. In 1957, he spent two years and nine months locked up in San Quentin State Prison in California.

Haggard said his time behind bars taught him "the absolute necessity of being honest."

He told Chen, "You know, you tell someone in San Quentin you are going to do something on Tuesday, you best do it, cause there's nowhere to go."

San Quentin transformed Haggard in more ways than one. On January 1, 1958, the legendary Johnny Cash performed a full concert for inmates. It was a defining experience for Haggard. From that point forward, he understood he could find his way with music.

Haggard said, "He captivated 5,000 convicts. And I said 'Hey there's something this guy's got something.'"

And it was Cash himself who later told Haggard to put all of his hardships into his songs.

And it payed off, Haggard has recorded more than 600 songs, including 40 number one hits. He's won three Grammys and just about every country music award imaginable.

Arguably his most famous song, "Okie from Muskogee," is also his most controversial, but he makes no apologies for it.

Haggard says of the song, "There's more than one message in that song. And of them is pride for this country. And we all agree on that."

Chen asked, "Are you still as big of a patriot today as you were when you wrote that song?"

Haggard replied, "Oh even more so. I'm deeply disturbed with our country and deeply in love with it."

Whether tackling politics, love or life, Haggard has done it all on his own terms, and he's celebrated for it.

Today he's a legend, and with his son and wife of 24 years by his side, he's happy.

But what is he most proud of in his long career?

He said, "I'm proud of the whole thing. I was 23 years old when I walked out of that jailhouse. It's been uphill all the way. But it's been fun."

You can see the complete Kennedy Center Honors on Tuesday night at 9/8 Central on CBS.