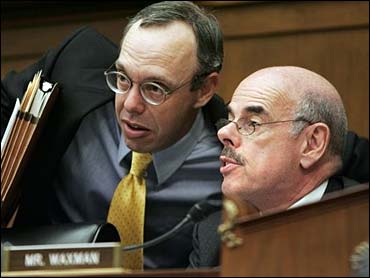 The public got an extraordinary glimpse Thursday into the world of drug marketing, as lawmakers released confidential Merck documents that detail how a sales army of 3,000 aggressively pushed the multibillion-dollar drug before it was pulled from the market last fall because of heart attack risks.

Instructions to the company's sales crew were as detailed as how long to shake a physician's hand — three seconds — and how to eat bread when dining with doctors — "one small bitesize piece at a time."

Sales representatives were offered $2,000 bonuses for meeting sales goals, and worked in campaigns with such code-names as "Project Offense" to try to boost sales even as regulators were about to increase warnings on the drug's label.

And when doctors asked about those risks, the Merck sales reps were to refer to a "cardiovascular card" with data suggesting that Vioxx could be safer than other anti-inflammatory drugs. Yet the card, also released Thursday, doesn't include the very study that raised the first warning signal that Vioxx could harm.

"The Cardiovascular Card is an obstacle handling piece," says an April 2000 memo to Vioxx sales reps, written just after the first heart-related research began trickling in. It "will allow you to set the record straight with your physicians."

The documents were released at a hearing of the House Government Reform Committee.

Merck Vice President Dennis Erb defended the company's handling of Vioxx, noting that it promptly released details of studies that first raised the specter of heart damage — and followed up by performing the study that ultimately doomed the drug.

"We believed wholeheartedly in the safety of Vioxx and that Vioxx was an important treatment option," he said. "My own father was a regular user of Vioxx until we voluntarily withdrew it from the market."

But even as scientific debate about Vioxx's heart risks began in 2000, sales of the painkiller steadily soared, to $2.5 billion in 2003.

"Why did doctors write so many Vioxx prescriptions even as evidence of harm mounted?" asked Rep. Henry Waxman, D-Calif.

Sales tactics in directly promoting the drug to doctors, he concluded: "When it comes to the one thing doctors most needed to know about Vioxx — its health risks — Merck's answer seems to be disinformation and censorship."

Merck pulled Vioxx after a study showed it doubled the risk of heart attacks and strokes in patients using the drug for more than 18 months. Merck is facing more than 2,300 lawsuits from customers.

But many people say Vioxx offered relief that other drugs haven't. So Erb told lawmakers the company has begun discussions with the Food and Drug Administration about what it could do to return the drug to pharmacy shelves.

FDA's scientific advisers in February narrowly voted that Vioxx might be able to come back onto the market under certain conditions, such as restricting its use to patients with severe pain or loading it with strong warnings about the heart risk.

That risk first appeared with research released in 2000 and 2001, showing certain Vioxx users suffered twice as many heart attacks and other cardiovascular problems as users of the older painkiller naproxen. In 2002, the FDA added warnings to Vioxx's label.

At first, scientists thought it might be because Vioxx users weren't getting a blood-thinning benefit that comes with many older painkillers. But by 2002, top specialists were worried that Vioxx might be the direct culprit — and Merck's own follow-up research prompted it to pull the drug.

FDA drug chief Dr. Steven Galson told lawmakers that the agency is taking steps to improve awareness by the public and doctors of potential drug risks as soon as they arise.

He said that what was happening with Vioxx wasn't clear-cut until the research was completed last summer. He acknowledged, however, that it may have taken too long to put a new warning label on the drug.

"We think we've addressed the sort of problems that happened here, and to make sure it won't happen again," Galson said.

Waxman tried to focus attention on the sales representatives, arguing that "the goal was sales, not education."

Rep. Tom Davis, R-Va., the committee chairman, said the new documents raise questions about Merck's handling of Vioxx. But he said he was not prepared to criticize the company without more information, noting that Merck made public results of its own studies that raised the concerns — data subsequently widely published, in medical journals and newspapers.

"A wide-awake physician would have obviously known about this?" Davis asked.

"That is correct," Erb responded.

But another witness, Dr. Michael Wilkes, vice dean for medical education at the University of California-Davis, said physicians are busy and look for shortcuts to get information. "Doctors don't read the medical literature," he said, and often rely on the salesman they meet in their office.