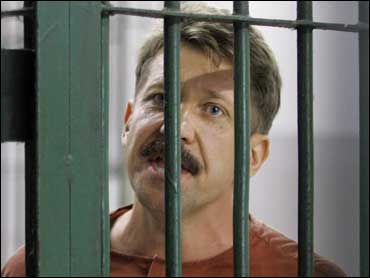 A Russian businessman who allegedly armed dictators around the world angrily accused the United States on Friday of framing him and pressuring Thailand to extradite him to face terrorism-related charges.

Waving his hands and shouting, Viktor Bout described himself as a hapless victim who has been forced to endure for the past year "extremely inhumane" conditions in a Thai prison as he waits to hear whether he will be sent to the United States.

"What about human rights? What about presumption of innocence? What about rule of law?" Bout, 41, yelled before he was led from a holding cell to a hearing on the extradition request.

"If I am the biggest arms dealer, where is the proof?" he shouted.

Bout, who has been dubbed the "Merchant of Death" and was the model for the arms dealer portrayed by Nicolas Cage in the 2005 movie "Lord of War," has been linked to some of Africa's most notorious conflicts, allegedly supplying arms to former Liberian dictator Charles Taylor and Libyan leader Moammar Gadhafi.

He has repeatedly denied any involvement in illicit activities and has never been prosecuted, despite being the subject of U.N. sanctions and a travel ban.

The U.S. is seeking Bout's extradition on charges he conspired to sell millions of dollars worth of weapons, including 100 surface-to-air missiles and armor-piercing rockets, to leftist rebels in Colombia. If convicted, he would face up to life in prison.

He was arrested in March 2008 during a sting operation in Thailand in which undercover U.S. agents posed as rebels from the Revolutionary Armed Forces of Colombia, known by its Spanish acronym, FARC.

Bout's extradition hearing started last June but has been repeatedly postponed by a shifting cast of attorneys and defense witnesses who have failed to appear.

His hearing was delayed again Friday because his wife said she was too sick to testify, and is to resume Monday. Five other witnesses including Bout are expected to take the stand later this month.

Shackled at the ankles and his face pressed against the bars of the holding cell, Bout appeared angry and defiant one moment and deflated and depressed the next.

"There are no prospects at all. No real hope," he said in comments broadcast on Russia's NTV channel. "If you are just by yourself versus the American administration, what (hopes) can you have? I will face a life sentence in America."

Bout's wife Alla handed out a statement in which her husband complained that the Thai prison was "probably worse than Guantanamo," the U.S. military prison in Cuba, and said he was arrested "not for committing any crime but as a result of a provocation, or rather a frame-up operation by the U.S. intelligence."

He described the Thai court system as being under the sway of American drug enforcement agents and the Thai government of being held "hostage" to American political pressure.

Bout's wife described the past year as "devastating."

"This is like medieval times," she said, speaking through a translator. "At first, I cried. But now I'm used to this atrocity."

The hearing has taken on a political tone in recent weeks after more than two dozen members of the U.S. Congress sent a letter to Attorney General Eric Holder and Secretary of State Hillary Clinton asking that the Obama administration make Bout's extradition a priority.

Russia's Foreign Ministry issued a statement calling the lawmakers' demands "bewildering" because "his guilt on charges put forth in the United States has not been proven."