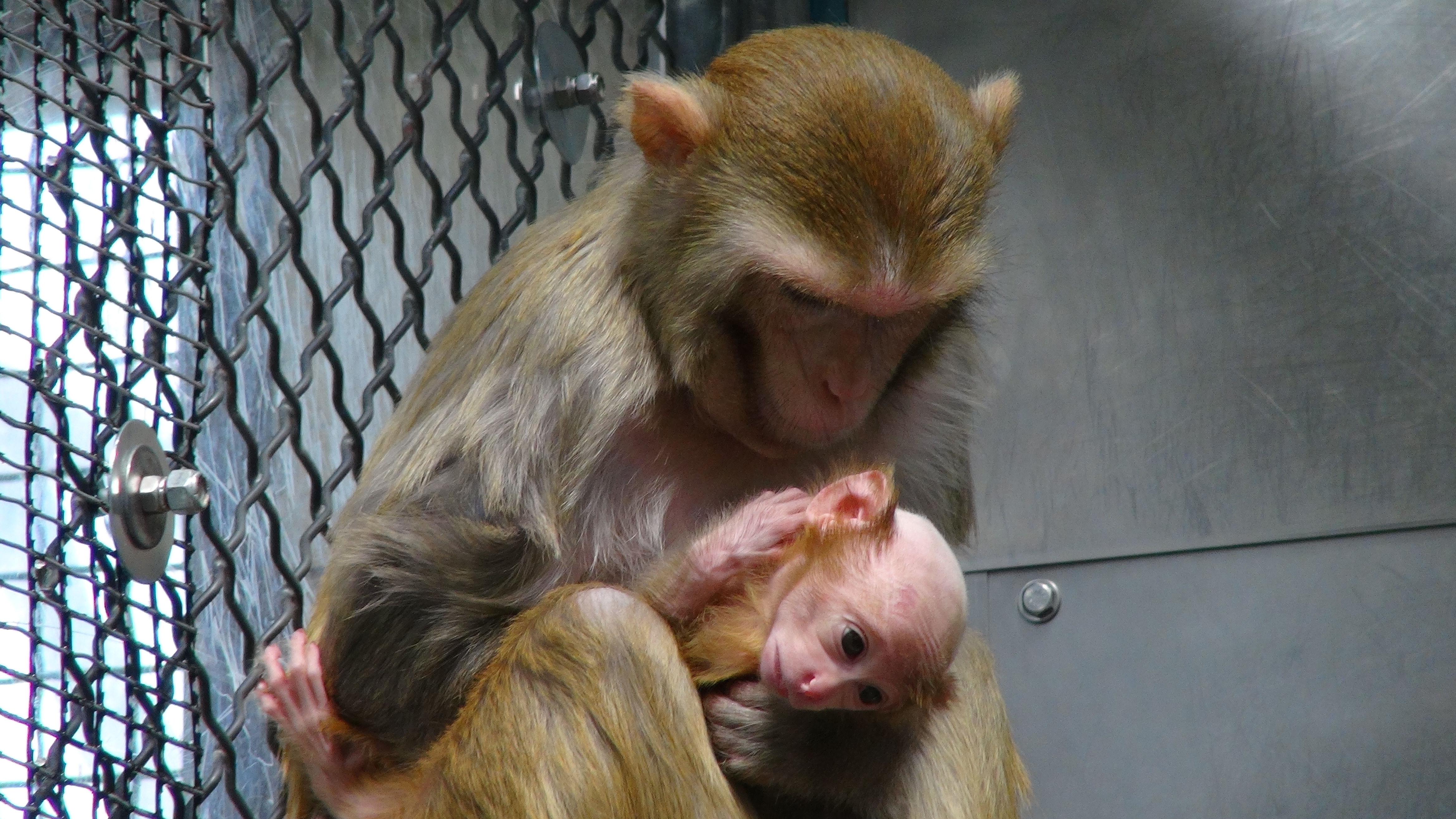 Through a Freedom of Information Act request, People for the Ethical Treatment of Animals (PETA) obtained more than 500 hours of video, hundreds of photographs, as well as animal study proposals and scientific reviews from the NIH, some of which were provided exclusively to CBS News for review.

The studies, which began in 2007, attempt to model some of the environmental risk factors associated with human mental illness, such as parental neglect and childhood abuse or trauma, in an effort to understand how they interact with genetic factors.

Methodologies used in the studies included separating baby monkeys from their mothers shortly after birth; sedating a mother in the baby's presence to see how it responds when she loses consciousness; intentionally startling monkeys with sudden, loud noises; and subjecting the monkeys to invasive procedures such as spinal taps and intracranial administration of medications.

As a result of its investigation, PETA is accusing the researchers of causing the baby monkeys undue harm, amounting to what it calls "child abuse."

"The one thing that we have learned from these experiments from the NIH is that monkeys are like us in ways that matter," Justin Goodman, director of PETA's laboratory investigations department, told CBS News. "They need the love and comfort of their mothers when they're young, they need the companionship of the families and peers. When they're deprived of that they are devastated emotionally and physically."

In an email to CBS News, one of the lead researchers, Stephen J. Suomi at the National Institute of Child Health and Development (NICHD), disputed the accusation of abuse, insisting that the studies "are conducted with the highest ethical standards at specialized centers that employ professional staff and highly skilled caretakers to ensure humane care of these animals, and are in strict accordance with animal welfare regulations and accreditations."

In addition to Suomi's lab, the experiments in question were also conducted at the National Institute of Mental Health under the late Dr. James Winslow; principal investigator Bruno Averbeck took over after Winslow's death and was not involved at the time, the NIH said.

Goodman said PETA believes the experiments are not only cruel, they're also unnecessary because similar issues have already been studied in human populations or could be more effectively studied in other ways. Additionally, PETA says findings about mental health and mental illness in monkeys are not necessarily relevant to human brains, and none of the research being conducted has resulted in better or new treatments for human mental illnesses. Goodman said he believes these studies are "completely unjustifiable and scientifically they are absolutely fraudulent."

Some independent scientists who reviewed the studies at PETA's request echoed those concerns. "I can no longer see a potential benefit from such experimentation," Agustin Fuentes, Ph.D., Chair of Anthropology at the University of Notre Dame, told the group. "It is my assessment that the monkeys used in these experiments experience substantial psychological (and likely physiological) harm and that there is no current evidence that there will be any results from the studies that move our understanding of human psychopathology forward."

Suomi, however, maintains this research could prove to have great value for humans. "NIH supports studies involving monkeys to supplement the developmental studies of human beings," Suomi told CBS News. "The same behavioral, neurological and health changes seen in nursery-reared monkeys are seen in children who were orphaned from their mothers, or raised by depressed, abusive, or neglectful mothers. These findings assist researchers in identifying humans most likely to suffer negative effects in at-risk situations and develop behavioral and drug therapies to improve negative outcomes early in development."

Monkey research on childhood development has a long history, and one that is closely tied to criticism by animal rights activists. In the 1950s and 60s, the late Dr. Harry Harlow, then a professor of psychology at the University of Wisconsin, pioneered monkey research that explored theories of attachment in early childhood. The methodologies used in his lab, which included forced mating of mentally disturbed monkeys and isolating baby monkeys in dark chambers for as long as a year, were partially responsible for inciting the animal cruelty debate. Perhaps ironically, the impetus for much of Harlow's research was to better understand the nature of love.

PETA believes Suomi -- a former student of Harlow's -- and other researchers have continued this legacy of animal exploitation using study models similar to those used in Harlow's lab. However, in their investigation, Goodman said PETA did not attempt to contact Suomi or Averbeck to discuss the research.

Dr. Constantine Stratakis, the scientific director of the NICHD, who oversees non-human primate research including that conducted by Suomi, told CBS News these studies are constantly monitored by the NIH's animal care committee and also consistently evaluated by the U.S. Department of Agriculture and the Association of Assessment and Accreditation of Laboratory Animal Care International, which is not affiliated with the NIH. Additionally, NIH scientists are required to justify why it would be necessary for their research to utilize an animal study model.

He said evaluations of the labs by these agencies have not indicated animal abuse and that the scientists take exceptional care of the animals. "They have names for these babies and birthdays for the babies," said Stratakis. "It's not that different from a human nursery."

PETA's investigation highlights a number of video clips obtained from the NIH, including footage of one test used to study the fright response in infants, in which a baby monkey is shown isolated in tiny mesh cage known as a "startle chamber," while researchers play loud and unexpected noises. The monkey is noticeably in distress and panicked.

But Stratakis said the cages are meant to protect the safety of the monkey since a panicked animal allowed to run free is likely to injure itself in these circumstances.

Stratakis added the methodologies depicted in videos are not currently used by the researchers. He said most of of the photos and videos in question are five years old; a spokesperson for the NIH said a majority of video footage obtained by PETA is from 2009.

"The protocols that are ongoing right now are different from the protocols that were in effect in studies conducted shown in the video," said Stratakis. "These studies have ended and just as the nature of most of our studies, when the goals are met the studies are concluded."

Stratakis added that the studies in question were initiated to observe how environmental and psychosocial factors experienced in early childhood have pervasive and long-term impact by influencing chemical reactions in the body and ultimately altering genes -- a fundamental and growing field of research known as epigenetics.

A number of well received and important papers have come out of Suomi's lab, said Stratakis. One benchmark study found that babies learn better when they see faces, and that an infant's efforts to mimic parents is a critical milestone in development. Another study, published in the journal Psychoneuroendocrinology in April, looked at how population density influences cortisol levels in the body. It found that when groups of monkeys were placed in smaller spaces, their physiological stress response increased, evidenced by higher cortisol levels found in their hair.

PETA asserts that researchers could gather similar data from humans using brain scans and other techniques. For their investigation, Goodman and his team consulted a number of outside experts, including world-renowned primatologist Jane Goodall and John Gluck, emeritus professor of psychology at the University of New Mexico and a research professor at the Kennedy Institute of Ethics at Georgetown University, who previously conducted similar research on social deprivation in primates.

"I eventually chose to leave that area of research because I came to believe that those models did not accurately represent the development and presentation of human mental illness," said Gluck in a statement prepared by PETA. "I came to the view that those models could not adequately inform innovative directions for successful clinical intervention to justify the costs in suffering and pain. I see nothing to alter that view with respect to the program of primate deprived early experience research currently being conducted at the NIH."

But Allyson Bennett, PhD , a professor in the department of psychology at the University of Wisconsin who previously worked alongside Suomi, said that human studies don't always produce consistent and reliable results. "What primate research gives you that's not possible in humans is the ability to control the environment," she told CBS News. She said studying development in infant primates allows for the consistency with factors such as food, shelter and sleep.

Bennett, who is also a member of Speaking of Research, a volunteer group of scientists and advocates who seek to raise awareness about the importance of animal research, said much of this research has also benefited animals living in both captive and natural habitats by identifying ways to help them thrive in places such as animal sanctuaries and zoos.

"In my experience scientists are deeply concerned about the animals they work with," said Bennet. "These are ethical and moral dilemmas all of us wrestle with."