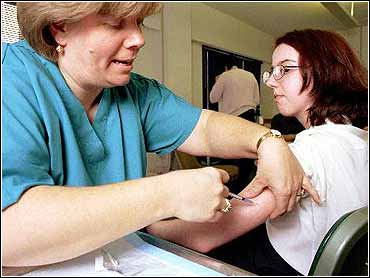 Health officials in Detroit are assuring parents that the three recent fatal cases of bacterial meningitis among school-aged children are unrelated.

School officials said attendance Monday at the middle school where one child died was down 30 percent.

The state Department of Public Health on Tuesday released results of tests by the Centers for Disease Control and Prevention on samples taken from the three children who have died since Sept. 28.

In addition, the rate of cases this year is similar to that in the past four years, the department said.

"These test results and the DNA fingerprinting conducted at our own laboratories in Lansing confirm the previous field investigation findings that there was no connection between these cases," said Dr. David R. Johnson, the state agency's medical chief.

Classmates of 11-year old Alex Wisner are mourning the loss of their friend. The little boy with the big smile died Friday after being stricken with bacterial meningitis.

"He was our son, and we loved him very much and he will always be in our thoughts and prayers," Alex's father, Brian Wisner, said.

The disease also claimed the life of a 6-year-old boy and 11-year old Emily Greco.

"She was a darling, she was a joy to us," her father Denis Greco said.

The tests showed each child died from a different strain of the bacterium Streptococcus pneumoniae, Johnson said.

Bacterial meningitis causes swelling around the brain and spinal cord. It is spread by direct contact with nose and throat secretions. Its flu-like symptoms include high fever, headache, nausea, vomiting and a stiff neck.

Since mid-September, six Detroit-area children have come down with meningitis. None of the children attended the same school.

A 3-month-old boy remained hospitalized in critical condition with the disease. A 10-year-old girl who was treated for the infection was released Tuesday.

So far this year there have been 145 reported cases of bacterial meningitis statewide, the health department said. That compares to 195 cases in all of 1999.