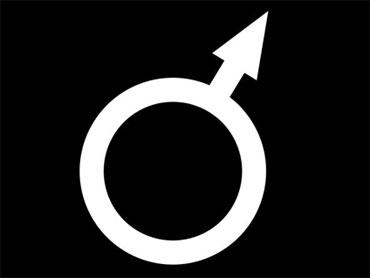 Fifty years ago, men were the dominant wage earners in America and ruled the workplace.

Today, men make up less than 50 percent of the workforce, and 40 percent of women are the primary source of their families' incomes.

"It is true," says New York University Sociology Professor Kathleen Gerson, "that the old breadwinner model of the strong high-earning, supporting the family on his own man is on the decline."

What effect has this sea change had on men's world view?

Sixty-one percent of the 1,500 men who took part in a Cosmopolitan magazine online survey said they believe they have it harder than previous generations.

"Women probably have higher expectations than they have ever had," Gerson observes. "They don't just want someone who's a good worker; they want someone who can share in all the work of the home."

Cosmo was to hold a "Man summit" Thursday to discuss men's changing roles, goals, needs and attitudes on themselves, the working world, money, life -- and women.

Other key findings of the survey:

-- 61 percent of men said that guys today have it harder than men of previous generations; yet 58 percent women believe men have it easier.

-- 79 percent of men and 85 percent of women say that men define success as a measure of financial status.

-- The number one thing men would like to change about women today: They wish women cared less about paycheck and status and were less materialistic.

-- 67 percent of guys and 73 percent of women say men today are less ambitious than they were a generation ago.

-- 54 percent of men and 62 percent of women agree that women are more ambitious than men.

-- 63 percent of men and 76 percent of women think men have an advantage over women when it comes to getting ahead at work.

-- But the majority (68 percent of women and 52 percent of men) say that traditionally "feminine" qualities-empathy, teamwork, and communication-are more important to success than "masculine" skills like aggressiveness and competitiveness.

-- 60 percent of men and 53 percent of women agree that women have unrealistic expectations of men-and that women expect more from men than men expect from women. Women want men to be successful, share the housework and childcare, and be their best friend.

-- Nearly 30 percent of men report that they would like to go back to a time when there were more rigid gender roles, because relationships were easier to navigate then.

-- 57 percent of men and 69 percent of women agree that men are more commitment-phobic now compared to previous generations.

-- When asked why men are waiting longer to get married these days, the sexes had different theories: 23 percent of men (the highest percentage) believe it's because they're waiting to be financially stable and established in their career. On the other hand, 37 percent of women (the highest percentage) believe that men enjoy being single and don't want to be tied down too soon.

-- Only 32 percent men and 29 percent of women think their generation will have happier marriages than past generations.

-- 42 percent of guys and 61 percent of women are worried that their partner may cheat on them at some point.

-- 23 percent of men and 24 percent of women are worried they might cheat on their partner at some point.

-- 33 percent of men and 30 percent of women say they could forgive infidelity.

-- 29 percent of men reported that the number one thing women don't understand about them is that they want to feel needed-if a woman is overly independent or ambivalent, he'll worry there isn't a place for him in her life.

-- 57 percent of men and 52 percent of women define masculinity as being a good husband and father, choosing that definition over physical strength and "masculine" attitudes like ambition and decisiveness.

-- When asked why fewer men are enrolling in college these days, men said it's because they're less confident a degree will lead to success. Women peg it on a lack of ambition.

-- Both men and women would rather have a male boss than a female boss.

On "The Early Show" Thursday, co-anchor Julie Chen talked to Cosmopolitan Editor in Chief Kate White and relationship expert Ian Kerner about Cosmo's "Man Summit," and the struggles men are having with their changing roles: