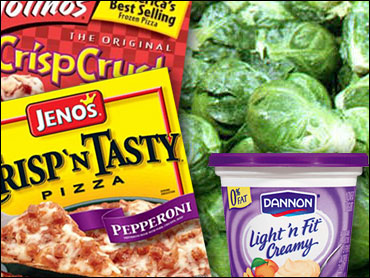 If men are from Mars and women are from Venus, then Mars is a land where the refrigerators are stocked with meat and frozen pizza and Venus has a bounty of yogurt, fruits and vegetables, a new study suggests.

The study of eating habits of adults - called the most extensive of its kind - was a telephone survey of 14,000 Americans. It confirmed conventional wisdom that most men eat more meat than women, and women eat more fruits and vegetables.

But there were a few surprising exceptions: Men were much more likely to eat asparagus, brussels sprouts, peas and peanuts. They also were bigger consumers of frozen pizzas, frozen hamburgers and frozen Mexican dinners.

Women are more likely than men to eat eggs, yogurt and fresh hamburgers.

Men also showed a little more of an appetite for runny eggs and undercooked hamburgers - two foods that health experts say carry a higher chance of contamination that can make you sick.

Women were more likely than men to eat only one risky food, raw alfalfa sprouts, which in the past 15 years have been linked to outbreaks of food poisoning.

The survey was done in 10 states, a collaboration between state and federal health officials. The results were presented Wednesday by Dr. Beletshachew Shiferaw, an Oregon health official, at a meeting of infectious disease experts in Atlanta.

Shiferaw said she could not explain some of the odder findings, like why men eat more asparagus than women.

Earlier this week at the same meeting, federal researchers reported that the proportion of foodborne illness outbreaks linked to leafy green vegetables has been growing.

The researchers analyzed 10,000 foodborne outbreaks from 1973 through 2006. Leafy greens were blamed for about 2 percent of outbreaks in the first 10 years, 4 percent in the second decade and 6 percent in the third.

That rise far outpaced the percentage increases in how many greens Americans ate during that time, according to the U.S. Centers for Disease Control and Prevention researchers.