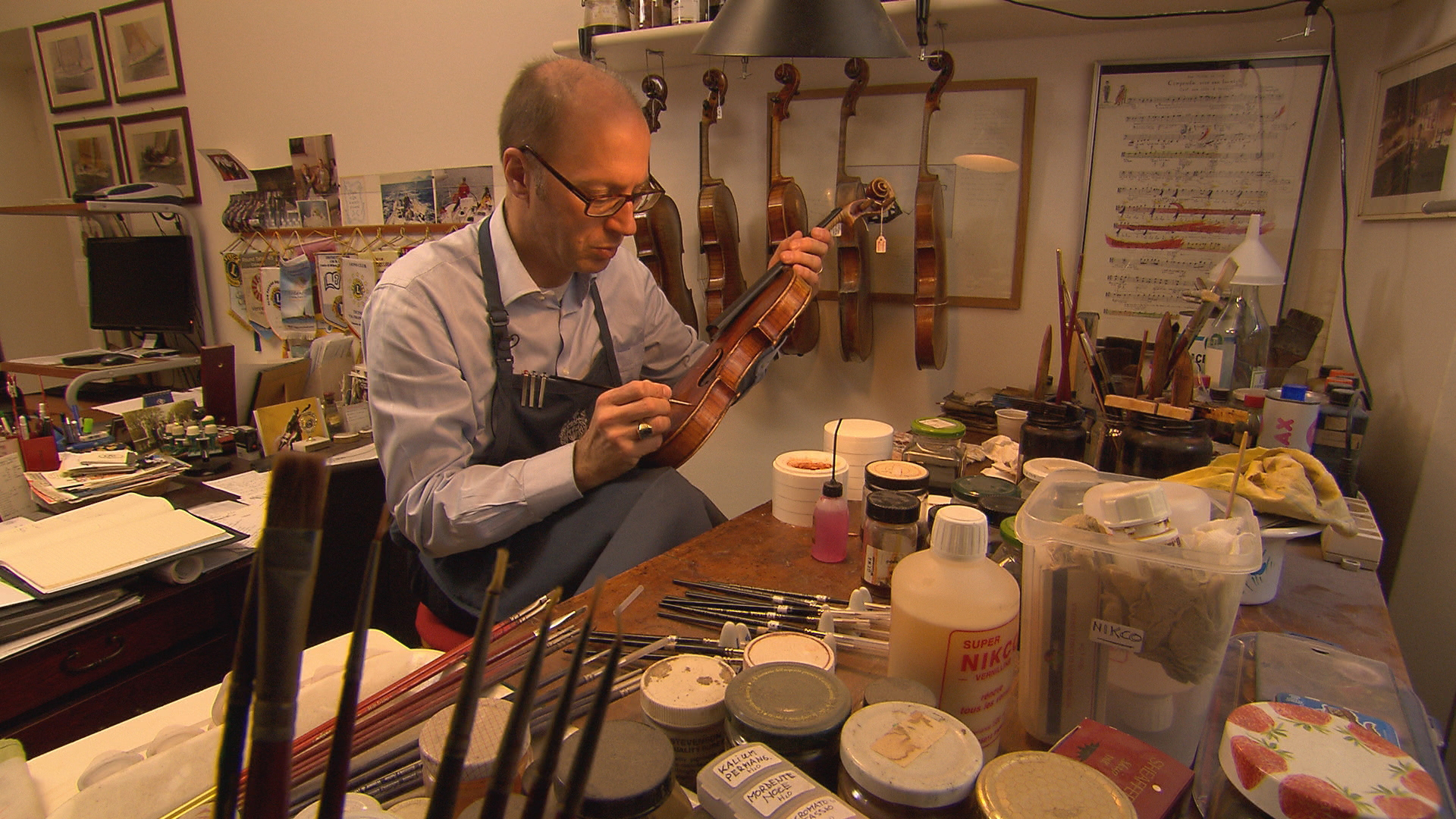 A visit to the birthplace of the violin -- a small town in Italy where Antonio Stradivari crafted his first instrument -- is to enter a different world, says correspondent Bill Whitaker, who traveled to Cremona, Italy, for this week's 60 Minutes story "The City of Music."

"When you talk to the craftsmen, it is somewhat spiritual," Whitaker says about his interviews with a few of Cremona's 150 violin makers. "The actual making of the violin takes a few months, but the whole process is a year because he's thinking about how to best put that violinist's soul into that instrument."

Producer Tom Anderson puts it like this: "He sort of talks to the wood, and the wood talks to him."

The following is a script of the video produced for 60 Minutes Overtime by Magalie Laguerre-Wilkinson, Craig Crawford and Sarah Springer,which was originally published Dec. 7, 2014.

This week, Bill Whitaker goes to the medieval Italian city of Cremona, the place where historians believe the violin was invented and continues to thrive.

Tom Anderson: Hundreds, if not thousands, of violins are still being made there every single year. And there's a rich tradition that started hundreds of years ago with probably the most famous violin maker of all time -- Antonio Stradivari.

Tom Anderson: It's a city where craftsmen in 150 violin shops continue to make violins using the same techniques, the same wood, and a similar varnish.

Bill Whitaker: To sit and watch somebody make a violin like that, and then talk to him about his craft and touch what makes him tick, touch his heart, all with the camera running? That's a treat.

Tom Anderson: A violin maker like Mathijs Heyligers, Bill basically said, "Are you an artist?" And he said, "No, I'm a craftsman." He sort of talks to the wood, and the wood talks to him.

[Mathijs Heyligers: To be able to make music, we need the tool. The tool is the violin. We build the tool. But our main goal is the sound. And that you can't touch it. You can't see it. But it is there.]

Bill Whitaker: When you talk to the craftsmen, it is somewhat spiritual. It's not just a piece of wood that they shape and glue together. They feel that the instrument has a life. The actual making of the violin takes a few months, but the whole process is a year because he's thinking about how to best put that violinist's soul into that instrument.

Magalie Laguerre-Wilkinson: He uses wood that's been seasoned for 50, 60, 70 years.

Bill Whitaker: I think he had some wood that was 100 years old.

[Mathijs Heyligers: Exactly. Well, the first violin maker bought it in 1877, and from then on, it has been handed over from maker to maker, because nobody had the chance or the courage to make an instrument out of it.]

[Bill Whitaker: Is this ready to be turned into an instrument now?]

[Mathijs Heyligers: I would say so, yes. After a century and a half.]

Bill Whitaker: The whole idea with these violins, they're not museum pieces. Even though they're in the museum they have to be played to stay alive.

Bill Whitaker: I mean, they've got to be used. And the bows have to go across the strings. And if not, they become dull and flat. And people can tell if a violin has not been played for a while.

Magalie Laguerre-Wilkinson: The price of these violins is really...

Magalie Laguerre-Wilkinson: Is really eye-popping. Did you touch one? Did you pick one up? Were your hands shaking?

Bill Whitaker: I went to a concert and went backstage. And the violinist was showing me her Stradivarius violin and I said, "Can I touch it?" And she goes, "No. No. No." Just the oils from your hand can interact with the varnish on the violin and change the sound.

[Itzhak Perlman: Unless sometimes there are cracks around]

[Itzhak Perlman: I have a Stradivarius. I'm very, very lucky.]

Magalie Laguerre-Wilkinson: How did you get him to play a tune for you?

Bill Whitaker: He said he doesn't like to play for a camera like this, because the conditions aren't right.

[Itzhak Perlman: And that's it, I either play right now, or don't play at all.]

[Itzhak Perlman: Is it really your birthday today?]

[Bill Whitaker: It really is.]

The correspondent talks about his beloved dog, "Molly," while reporting for 60 Minutes on the science of dog intelligence
Thanks for reading CBS NEWS.
Create your free account or log in
for more features.
View CBS News In
CBS News App Open
Chrome Safari Continue
Be the first to know
Get browser notifications for breaking news, live events, and exclusive reporting.