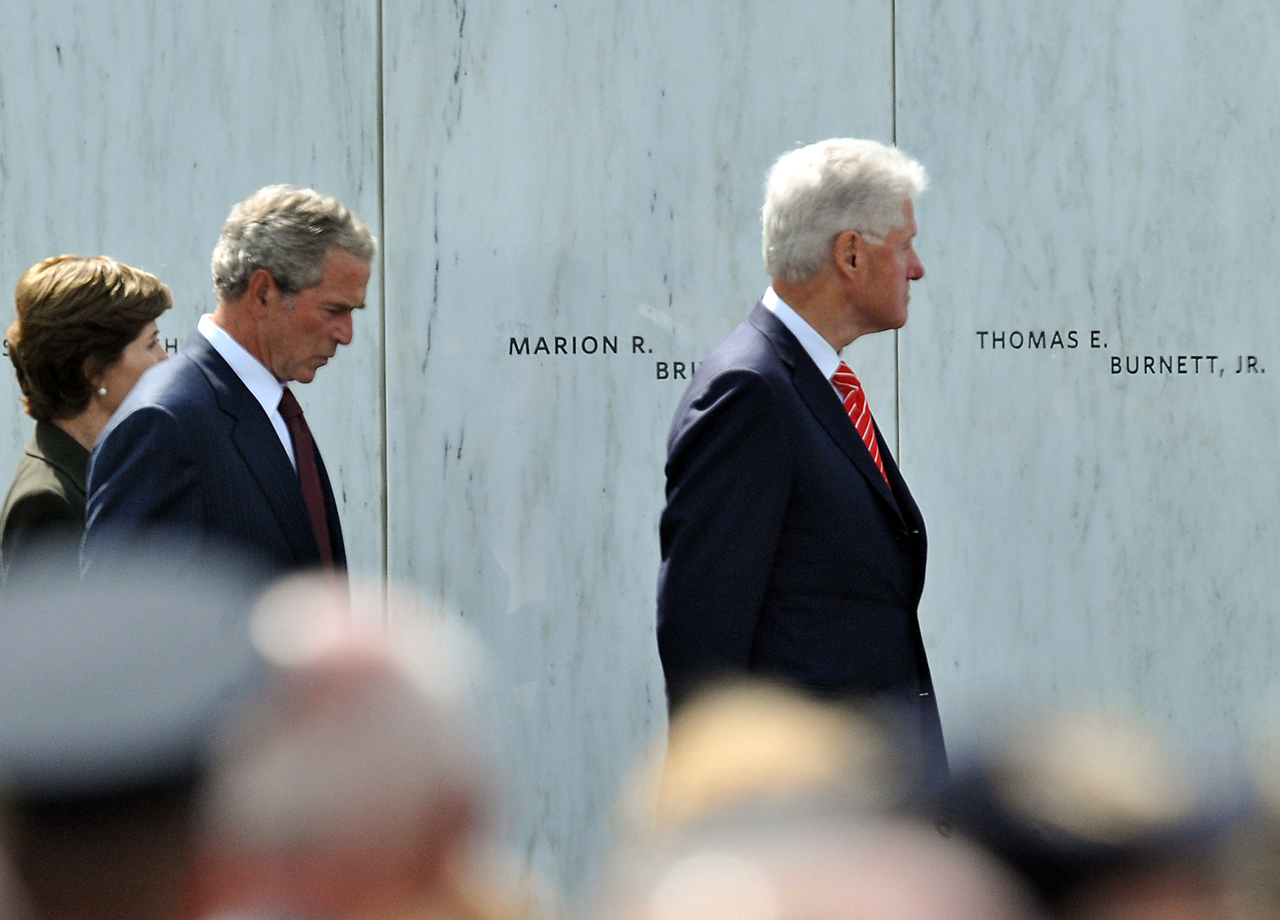 SHANKSVILLE, Pa. — The 40 passengers and crew who fought back against their hijackers aboard Flight 93 on Sept. 11 performed one of the most courageous acts in U.S. history, former President George W. Bush said Saturday at a ceremony dedicating the first phase of a memorial at the nation's newest national park.

The hijackers intended to crash the plane in Washington but "never made it because of the determination and valor of the passengers and crew of Flight 93, that plane crashed in this field, less than 20 minutes by air" from the target, said Jon Jarvis, director of the National Park Service.

President Bill Clinton likened the actions of those aboard Flight 93 to the defenders of the Alamo in Texas or the Spartans at the Battle of Thermopylae some 2,500 years ago, with a dramatic and telling difference: "They were soldiers. They knew what they had to do."

The passengers and crew were not, but they gave "the entire country an incalculable gift: They saved the capital from attack," an untold amount of lives and denied al Qaeda the symbolic victory of "smashing the center of American government."

They were, he said, "ordinary people given no time at all to decide and they did the right thing. And 2,500 years from now, I hope and pray to God that people will still remember this."

They were among several speakers at the dedication of the Flight 93 National Memorial who told of the sacrifice and honor of the passengers and crew. The ceremony drew more than 4,000 people, including hundreds of victims' relatives, to the rural Pennsylvania field where the hijacked plane crashed nearly 10 years ago.

Those aboard knew that it was more than a hijacking, but an opening shot in a new war, said Vice President Joe Biden said. He said they acted as citizen patriots have done since Capt. John Parker said in April 1775 that if war is what they want, "then let it begin here."

President Bush also pointed to what he called a shining example of democracy in action, referring to the group's decision to hold a vote to decide to try to overpower the hijackers.

"The moment America's democracy was under attack our citizens defied their captors by holding a vote," he said. "The choice they made would cost them their lives."

The storming of the cockpit "ranks among the most courageous acts in American history," President Bush said.

The Rev. Daniel Coughlin, who was the U.S. House Chaplain at the time of the attacks, called the sacrifices made by the passengers and crew "willing seed for freedom's harvest."

"They refused to be paralyzed. ... They break the silence and decidedly act together. They do only what is possible in an impossible situation," he said in the invocation. "Because they are your children, they find within themselves, true freedoms."

Coughlin's invocation was followed by a long moment of silence as the U.S. flag was brought in, then a singing of "The Star-Spangled Banner." The names of the victims were also read as bells tolled, and Grammy Award-winning musician Sarah McLachlan performed.

Poet Robert Pinsky took to the lectern and read a pair of poems, one about "needing to remember, even if you don't want to," and a second about heroism. The poems came from Brazilian Carlos Drummond de Andrade and Poland's Czeslaw Milosz.

Also during the ceremony, President Clinton announced that he and U.S. House Speaker John Boehner will mount a bipartisan effort to raise the remaining $10 million needed to completely fund the memorial.

Ahead of the dedication, crowds getting there were slowed by weather-related traffic jams, muddy conditions and security rules but remained undeterred.

Among them was Butch Stevens, 69, of Carlyle, Ill., who stopped on his way back from a visit to Washington, D.C.

Stevens said he had no connection to anyone aboard the flight, except, as he said, as an American.

"This kind of makes you realize where you live," Stevens said of the bravery of those who died aboard the plane.

The dedication was the day's most prominent Sept. 11 observance among many throughout the country. In New York City, hundreds of families, friends and strangers ringing lower Manhattan clasped hands as a bell clanged at 8:46 a.m. to signify the time the first hijacked plane crashed into the World Trade Center's North Tower. It was one of several public and private events scheduled around the city, including a free performance by the New York Philharmonic and a memorial by Fire Department of New York for its 343 members who died on 9/11 and those who have died from illness after working at ground zero.

In Pennsylvania on Friday, family members of those who died on Flight 93 visited the crash site, read the guestbook and viewed the many mementos left by people from all over the world who have come to pay their respects.

Relatives shed some tears, but they also celebrated the spirit of the guestbook — a rare feeling that people from vastly different walks of life had come together.

"I don't focus on what happened. You can't change that," said Lorne Lyles, whose wife, CeeCee Ross Lyles, had been working as a United Airlines flight attendant for only nine months on that September morning in 2001.

"Coming here is more of a celebratory thing. She's been memorialized," Lyles said. "Just to see the outpouring from all over the world is touching. You really do have some caring people in the world."