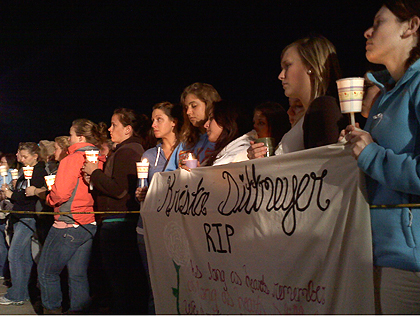 (CBS/WBZ/AP) CONWAY, N.H. - What was supposed to be a vigil by residents in Bridgton, Maine Thursday night, turned into a memorial for mother Krista Dittmeyer and a show of support for her family.

CBS affiliate WBZ reports that friends gathered at the town's elementary school to remember the mom whose body was found Wednesday in Duck Pond in Conway, N.H.

"Krista, I love you so much. I hope you see how many people care about you right now," she said. "We know you're looking down and your daughter's going to grow up to be an amazing person just like you were."

The 20-year-old Portland, Maine mother's body was found by divers in a retaining pond about a quarter-mile from where her car was found idling Saturday in the parking lot of Cranmore Mountain ski area.

Senior Assistant Attorney General Jane Young would not say Wednesday what led police to search the pond, only saying it was part of the investigation. Young would also not comment on the cause of death, but said it is being treated as suspicious.

The medical examiner's office conducted an autopsy Thursday, but Young said the results would not be released pending further investigation and toxicology results. Young said those results may not be available for six to eight weeks.

According to WBZ, police say Dittmeyer lived and worked in Portland and had ties to Bridgton, Maine.