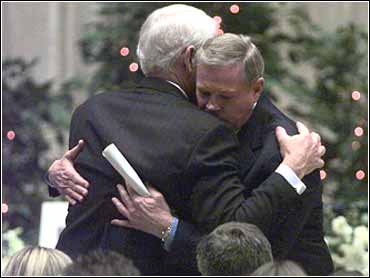 Bobbi Olson was remembered Sunday for her elegance, grace, hospitality and even her long shopping binges during a two-hour memorial service at McKale Center.

The wife of Arizona basketball coach Lute Olson was 65 years old when she died New Year's Day after a two-year battle with ovarian cancer.

About 4,000 people attended the service, which was televised live by all three television stations in Tucson and by Fox Sports Net.

As part of the ceremony, the McKale Center court was renamed the Lute and Bobbi Olson Court. The floor had been proclaimed Lute Olson Court near the end of the 2000 season.

"Thanks for your smile and for your wink," former Arizona player Bruce Fraser said. "Thanks for the constant reminder that everything is going to be fine. Thanks."

There was a private funeral service Friday with about 500 people in attendance.

Bobbi Olson was diagnosed with cancer nearly 2@1/2 years ago after initially feeling ill while on vacation in Budapest, Hungary.

Doctors surgically removed a blockage in her intestines. During the procedures a sizable mass was discovered. The Olson's had doctors from Tucson fly to Hungary to begin the rehabilitation and chemotherapy.

"What was supposed to be a fun and cultural experience turned into a nightmare," said Paul Wietman, an Olson travel companion and longtime family friend. "She truly was the ultimate wife, mother, grandmother and friend to us all."

"Mrs. O meant so much to all of us," current Wildcats forward Richard Jefferson said. "She always knew what to say, when to say something and how to say it."

Stories were recalled about Bobbi Olson's extensive shopping exploits, making apple pancakes for recruits when they first visited the school and for being a second mom to the players.

There was also a request that her regular seat in McKale Center, in Section 16, Row 2, Seat 5 be retired. Two flowers rested on her chair during the memorial.

The family has asked that any remembrances be made in the form of contributions to a memorial fund in Bobbi Olson's name at the Arizona Cancer Center in Tucson.

Cuomo says protests in New York continue to be peaceful