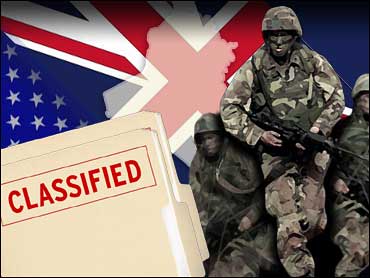 According to a leaked British defense memo, the Pentagon is considering drastically reducing the number of forces in Iraq early next year, reports CBS News Correspondent Kimberly Dozier.

The memo, marked "Secret — U.K. Eyes Only," and signed by Britain's Defense Secretary John Reid, says "emerging U.S. plans assume that 14 out of 18 provinces could be handed over to Iraqi control by early 2006," which would see the multinational force cut from 176,000 to 66,000.

However, Dozier reports that coalition commanders on the ground are more cautious. The memo adds that they fear Iraqi troops will still be too green to keep the violence under control.

The memo also shows Britain is considering scaling back its troop presence from 8,500 to 3,000 by the middle of 2006, saving nearly $1 billion annually.

"We look at the conditions as being the determining factor as to what the U.S. presence there needs to be, and we have contingencies for an increased presence, a steady state, and also a decreased presence," Whitman said.

The Pentagon missed a Monday deadline for submitting a report to Congress on progress in shifting security responsibilities to the Iraqis and projecting how many U.S. troops would be needed there next year. Lt. Col. Rose-Ann Lynch, a Pentagon spokeswoman, said Congress was informed that the report is still in the works.

At the White House, spokesman Scott McClellan told reporters that President Bush is relying on commanders in Iraq to judge when the time is right to adjust the level of U.S. forces, based in part on an assessment of how capable the U.S.-trained Iraqi government forces are of fighting the insurgency on their own.

British officials confirmed the authenticity of the document, first published by The Mail on Sunday newspaper.

Prime Minister Tony Blair's official spokesman, who speaks on customary condition of anonymity because he is a civil servant, said the memo merely confirms the government's long-standing plan to train Iraqi forces and gradually hand over security responsibility.

"It should come as no surprise that we are going through the thinking process of how we achieve that," he said. "But as John Reid said, the process of transfer will only come at the point where the Iraqi government and ourselves believe that the Iraqi forces are capable of taking that load. Has there been a political judgment to withdraw? ... No."

Blair has faced repeated calls from political opponents to set a timetable for withdrawing British troops from Iraq. London and Washington are reluctant to do so, fearing such a move would give heart to militants waging a bloody insurgency in Iraq.

The memo, titled "Options for future U.K. force posture in Iraq," sets out a timeframe for handing responsibility to Iraqi forces in specific towns in southern Iraq.

"We have a clear U.K. military aspiration to hand over to Iraqi control in al-Muthanna and Maysan provinces in October 2005 and in the other two multinational division south east provinces, Dhi Qar and Basra in April 2006," the document adds.

The document suggested that U.S. military chiefs in Washington and U.S. commanders on the ground in Iraq disagreed over the scale of troops reductions.

"There is a debate between the Pentagon/CENTCOM who favor a relatively bold reduction, and MNF-I (U.S. commanders in Iraq) whose approach is more cautious," the memo reads.

Britain's Defense Secretary said Sunday the document was simply one of several updates examining possible scenarios for the war in Iraq. The document was not dated, but he has been defense secretary since May 6.

"We have made it absolutely plain that we will stay in Iraq for as long as is needed," Reid said. "No decisions on the future force posture of U.K. forces have been taken."