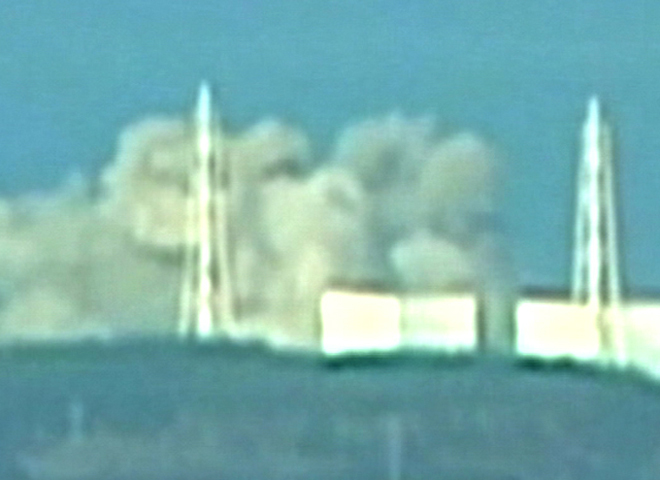 The explosion at a nuclear plant in Fukushima, Japan destroyed a building that houses a reactor Saturday, triggering a radiation leak and fears of a nuclear meltdown.

But a representative of the global nuclear power industry asserts the possibility of a meltdown is "diminishing by the hour," making a meltdown "most unlikely."

Ian Hore-Lacy, director of communications of the World Nuclear Association, told "Early Show on Saturday Morning" co-anchor Russ Mitchell the situation is "less dangerous than it was yesterday. The challenge remains to keep the fuel cool in the reactor, particular they that number one unit of the Fukushima Dai-ichi plant.

"Eleven reactors shut down automatically when the earthquake hit. And with most of those, the cooling has been reasonably straightforward, because there's been a power supply to the plant, either from the grid, or from the backup generators. But with the first two units of the Fukushima Dai-ichi plant, the generators cut in and ran for about an hour and then stopped. And we understand the reason they were stopped is because they were overwhelmed by the tsunami. And that precipitated the crisis, really, and then the challenge of keeping the reactor cool, because they then have to default to their battery power. And as far as I understand it, that may not have been sufficient to do everything that was fully required."

Authorities have ordered residents in a 12-mile radius of the plant, and Hore-Lacy depicted the move as "a very conservative thing. And obviously, the authorities are concerned that there might be a fuel meltdown, or there might have been, at least when they ordered the evacuation.

"I think that that possibility is remote at the best of times, and diminishing by the hour as the fuel gets cooler and generates less heat. It now would be generating only about half a percent of the heat that it was generating at the time that the reactor shut down. But the cooling demand is still great."

People around Japan, Mitchell pointed out, are worried about a possible meltdown. One American living in Tokyo even said on "The Early Show on Saturday Morning" people there are "in panic mode" over it.

But Hore-Lacy said they should just "sit tight and watch. It's really -- I mean that hydrogen explosion ... was a surprise. But hydrogen is always a factor in any nuclear reactor, but I think that the focus here has been on keeping the things cool, and obviously there was a hydrogen buildup somewhere and (it led to the explosion). ... But that was a bit of a diversion. I don't think it's increased the risk of radiation release at all. There is a slight risk of radiation release, but not, I think, of any magnitude. And there is a possibility that some fuel may be damaged. But I think that a meltdown, particularly at this stage, some 30 hours after shutdown, is most unlikely."

He observed that Japanese nuclear plants are constructed with earthquakes in mind, saying, "They're all built in the secure knowledge that they'll almost certainly have to endure serious earthquakes during their lifetime. And the reactors themselves are built in a very robust way, on solid rock. And I think, with all the earthquakes that have been in Japan, I don't think any of the basic reactor structures have ever been damaged. Although, of course, all the services around are liable to be damaged."