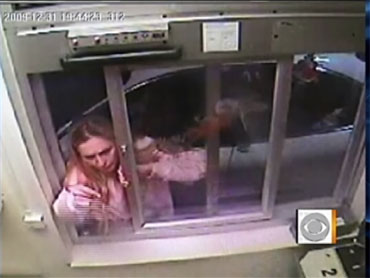 A security video from a McDonald's in Ohio shows the 25-year-old woman punching two restaurant employees and smashing a drive-thru window because she couldn't get Chicken McNuggets before 10:30 a.m.

The tantrum caught on tape in Toledo earlier this year shows the customer reaching through the drive-thru window, slugging one worker and then another. She then grabs a bottle out of her car and tosses it through the glass window before speeding off.

It happened early on New Year's Day. Police say Dushane was angry that McNuggets weren't being served, because it was breakfast time.

The strictly upheld policy has long been the butt of jokes, including a priceless scene in the Adam Sandler movie "Big Daddy," but no one has taken it quite this far -- until now.

Dushane says she was drunk at the time. She was sentenced to 60 days in jail last month and ordered to pay McDonald's for the broken window.

The video was released Monday when it became public record.