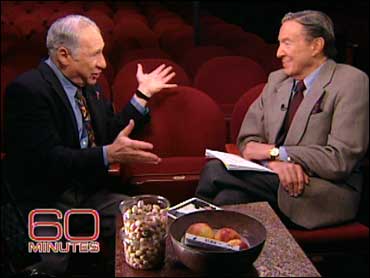 As Broadway's brightest stars gather for this year's Tony awards on Sunday, 60 Minutes decided to look back to Broadway's biggest hit ever — and maybe its funniest musical comedy ever. The show is, of course, "The Producers." Before it opened five years ago, correspondent Mike Wallace caught up with its lunatic creator, Mel Brooks, who based the play on his own fabled 1968 movie of the same name.

"Tell me something. The show ...," Wallace tried to ask Brooks.

"Is that a hundred-dollar watch? Let me see that watch," Brooks asked Wallace.

"Yeah. Lights up in the dark," Wallace explained.

"What a cheap son of a bitch you are," Brooks said.

"You got that right," Wallace responded. "You're a great judge of character."

So would you give this man $10.5 million to put on a Broadway show? A bunch of savvy producers did just that, even though they knew that Brooks was sure to make fun of what it is they do.

You may remember that in the original movie, Zero Mostel played the former Broadway king who hadn't had a hit in a long time. When the show debuted on Broadway in 2001, Nathan Lane played the character, Max Bialystock, and Matthew Broderick played Leo Bloom, the creative accountant who realizes that crime could pay if they cheated their investors.

"Two Jews decide to put on a musical play and raise, instead of 100 percent, 25,000 percent," Brooks explained. The money would be raised by seducing "little old ladies."

"On their way to the cemetery, they all stop off at Max Bialystock 's office for a little shtup, and they give him a check made out to the title of the play, 'Cash,'" Brooks said.

Bialystock and Bloom search for a sure-fire flop, the most offensive play ever written, and they found it: something called "Springtime For Hitler."

This 1968 movie was Brooks' first feature film — and the first time he had ever written and directed. It won him an Academy Award for best original screenplay. But it may come as a surprise to you that it also marked Brooks' debut as a composer.

Brooks told Wallace he writes music "into a tape recorder," while singing and playing the piano.

Into his tape recorder, he has sung the music and lyrics to some 16 new songs — and, along with collaborator Tom Meehan, he's written the script for the show.

"Instead of the normal Mel Brooks, who is rather vulgar, burlesquey, vaudeville, harsh, cheap, she classed me up," Brooks said.

Brooks admitted that he got in her way once in a while. Asked why he didn't direct the show himself, he said, "She is a Broadway director. She sees the whole show. She knows where all the parts fit."

At the recording session of the show's original cast album, it was clear that Brooks was comfortable surrendering control to Stroman of the attention to detail that he normally reserves for himself.

Stroman told Wallace that Brooks knows how to collaborate and that he did let her direct. "He has merely been the writer on this, and he only worries about the jokes," she said.

In the show, when actors are auditioning to see who'll play the role of Adolf Hitler, for Brooks, that is funny. But because Brooks is Brooks, "funny" also means being the furthest thing from politically correct.

"You offend …," Wallace pointed out.

"As many people as I can," Brooks replied.

Nazis? "No, no, no. Nazis I really offend," Brooks replied.

In the show, he really takes off on gays, as in the song, "Keep It Gay."

"I thought about the gay stuff and I wondered, 'Well, in this day and age, well, how will this play?' And I'm telling you, you know, people just go nuts. It's like we've given them a free pass somewhere to say, 'Yeah, you can laugh at this,'" Lane said.

"You want to make it on Broadway. That's the Great White Way; that's the dream of every little Brooklyn Jewish kid who ever thought about show business," Brooks said.

There are still vestiges of that little Jewish kid, born Melvin Kaminsky in 1926, who grew up during the Depression, telling jokes to the kids on street corners, later entertaining the guests at Catskill Mountain resorts, drawing on his absurd view of the world — and, he says, his sense that Jews were outside the mainstream of American life.

Asked why he invokes that theme as much as he does, Brooks said, "Maybe because I'm angry. Who knows? It may be a deep-seated anger at anti-Semitism. Yes, I am a Jew. I am a Jew.

"Oh, and I was in the Army. 'Jew boy, out of my way. Out of my face, Jew boy.' This guy called me Jew-something and I walked over to him," Brooks remembered. "I took his helmet off. I said, 'I don't want to hurt your helmet, 'cause it's GI issue.' And I smashed him in the head with my mess kit."

After the war, he got a job as a writer on the groundbreaking Sid Caesar TV programs. Brooks went on to write and direct some of Hollywood's funniest movies: outrageous parodies, impossible sight gags, vulgar humor. If he is remembered for anything, if one scene forever guarantees Brooks' reputation as a connoisseur of bad taste, it will be the scene from "Blazing Saddles" when the cowboys were breaking wind across the prairie.

"That may be. What you just went by may be the point — it's hilarious. Actually, look, when I was eight or nine years old, I would live at the movies. I loved the movies," Brooks explained. "And I loved westerns. But you'd watch these cowboys, and they'd sit around the campfire and they'd swill maybe 100,000 beans — and they'd drink tons of black coffee.

"Don't tell me, don't tell me that there's not gonna be a little bit of gas that emanates," Brooks joked. "You know, I mean, that's a lot of beans. That's a lot of black coffee, you know. So I just decided to drop the other boot, so to speak, and tell the truth."

Now what kind of woman could fall in love with such a truth-teller? An actress of taste, class and elegance: Anne Bancroft.

She rarely appeared in his movies, but they were together in "To Be or Not to Be."

Mrs. Brooks always enjoyed watching him as he played out his preoccupation with the horror and humor of his favorite nemesis, Adolf Hitler.

In the Army, Brooks had a firsthand look at what the Nazis were about. He spent a couple of years during World War II in Belgium and Germany deactivating land mines.

"Hitler was part of this incredible idea that you could put Jews in concentration camps and kill them. And how do you get even? How do you get even with the man? How do you get even with him? There's only one way to get even," Brooks explained. "You have to bring him down with ridicule. Because if you stand on a soapbox and you match him with rhetoric, you're just as bad as he is. But if you can make people laugh at him, then you're one up on him. And it's been one of my lifelong jobs has been to make the world laugh at Adolf Hitler."

"You wrote, 'I went into show business to make a noise, to pronounce myself,'" Wallace remarked.