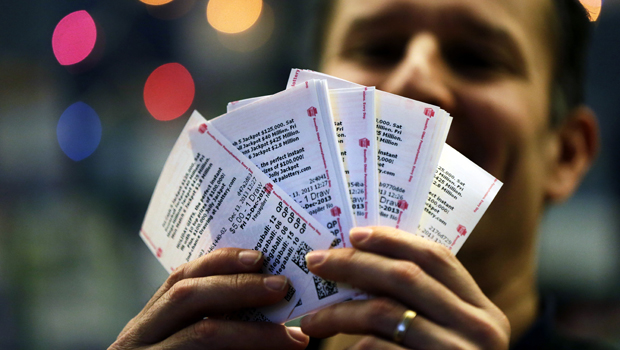 DES MOINES, Iowa -- One of the largest jackpots in U.S. lottery history climbed even higher Saturday after no ticket matched all six numbers to win the $425 million top Mega Millions prize.

With the Friday the 13th drawing failing to produce any winner lucky enough to claim the fifth-biggest jackpot ever, officials raised the amount to $550 million for Tuesday's drawing. That now ranks as the fourth-biggest.

Paula Otto, the Virginia Lottery's executive director and Mega Millions' lead director, told The Associated Press early Saturday that she expects the amount to rise even higher before the drawing. It could approach or surpass the largest Mega Millions jackpot ever claimed, $656 million in March 2012. Had someone won Friday, it would have been that game's second-highest prize.

"We've never had a jackpot at this level in December leading into the holidays," Otto said. "If we keep rolling, we could well be at a billion dollars going into Christmas."

But each time the lottery fails to produce a jackpot, as it now has 21 straight times on this run, the pot gets even larger. That increases the number of tickets sold while decreasing the chances that nobody will win.

Otto said after $167 million in sales of mostly $1 tickets since the previous drawing on Tuesday, the odds of someone picking all the winning numbers Friday were about 50-50. They'll almost certainly be even higher next Tuesday and even higher in subsequent drawings should the jackpot still go unclaimed.

Earlier Friday, Otto said sales were 40 percent ahead of projections, prompting officials to boost the jackpot to the jackpot from $400 million to $425 million.

"I feel that my odds are so low anyway, it doesn't really matter," said the IT specialist. "I only buy a ticket to get a dollar's worth of entertainment."

A major game revamp to Mega Millions in October - aimed at growing bigger jackpots in a shorter amount of time - decreased the odds of a person winning the top prize to about 1 in 259 million. It was previously about 1 in 176 million, nearly the same odds as winning the Powerball jackpot. Still, the cost for a chance at winning millions with Mega Millions is just $1.

"In some ways we're in uncharted territory because we have this new matrix," Otto said. "... How wonderful that the changes seem to be working immediately to get us bigger jackpots."

It also gave ticket buyers a chance to daydream - at least until the drawing dashed their hopes of striking it rich.

"It would change my life, absolutely," said Barbara Cooper, who bought two tickets Friday at a New Orleans convenience store. "We still have children in college, so that would help out immensely."