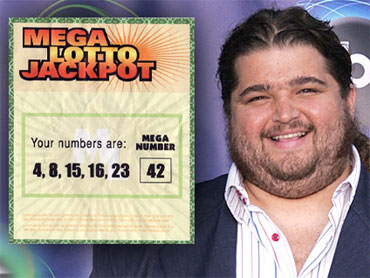 There are only two jackpot winners from Tuesday's near-record Mega Millions lottery drawing, officials say, but for millions of Americans who watched the hit television series "Lost," the winning numbers seem... oddly familiar.

Early in the show, viewers are introduced to a series of six numbers - 4, 8, 15, 16, 23 and 42 - that start turning up everywhere: in inscriptions, as a code that needs to be put in a computer. Viewers eventually learn that they are lottery numbers, the ones that character Hugo "Hurley" Reyes used to win millions, only to suffer a series of spectacular misfortunes.

Watch a clip below of Hurley winning the lottery on "Lost"

Tuesday's real world winning numbers were 4, 8, 15, 25, 47 and 42. Ok, so it's not a perfect match, but it does have a pretty familiar ring, especially with the matches coming in the first three slots and the all-important "Mega ball" kicker.

"Lost" viewers eventually learn (spoiler alert!) that the numbers represented the main characters themselves, each of them a candidate to take over stewardship of the special island - which Hurley does at the end of the series.

Mega Millions said 25,587 tickets matched three of the winning numbers, plus the bonus number. Anyone who played the "Lost" numbers would have won $150 per ticket.

When Hurley wins the fictional "Mega lotto jackpot" on the show, the payout is described as a "near-record" sum - just as Tuesday's real drawing was a near-record.

The prize is the fourth-largest in U.S. history and the second-largest in Mega Millions' history, said Arizona Lottery spokeswoman Cindy Esquer. The lottery's prize of $390 million in March 2007 remains the nation's richest on record.

The two jackpot-level winning tickets were sold in Idaho and Washington state. The winners have not yet come forward. When they do, they'll be getting around $190 million each, before taxes.