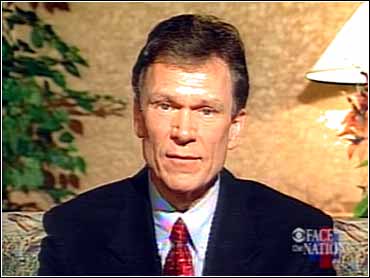 
"America is about to fall in love with Tom Daschle," gushed California Sen. Barbara Boxer about the soon-to-be Senate Majority Leader.

Boxer, one of the few senators who is shorter than the five-foot-six South Dakotan, is not the first woman to be wowed by him. Old friends from South Dakota remember him as a quiet, hardworking, young field director for Sen. Jim Abourezk, married to a drop-dead gorgeous woman. In 1978, Daschle and his first wife, Laurie, rang 40,000 doorbells during his campaign for the House, and he eked out a 139-vote victory in a recount. His current wife, Linda, is a former Miss Kansas who went on to become a Washington lobbyist and a top official at the FAA.

"He has a way of delivering a negative message in a very positive way," says Anita Dunn, his longtime political advisor. Daschle has been the Democratic minority leader since 1995, when he beat Connecticut Sen. Christopher Dodd for the job by one vote. And he has spent years in politics being underestimated. Dodd now describes him as a terrific listener who "gives everyone a chance, and who never gives anyone the feeling that what they had to say was not important."

Sen. Robert Byrd of West Viriginia, who supported Dodd in that fight, says, "I was totally wrong about this young man. He has steel in his spine despite his reasonable and modest demeanor."

Daschle is soft-spoken, earnest and, at 53, almost too choir-boyish. The son of a bookkeeper in an auto parts store from Aberdeen, S.D., he went to Catholic schools, then to college on an ROTC scholarship, before serving as Air Force intelligence officer from 1969-1972.

Though he never saw combat in Vietnam, Daschle joined the Veterans Affairs Committee in 1979 and moved it away from a concentration on World War II-generation issues to Vietnam-era problems like Agent Orange.

He continues to methodically work his home state and spends three weeks most every August driving though all of South Dakota's 66 counties.

Although he has been the Democratic leader for six years, the Democrats were in the majority for only 17 days in that period – during the few weeks in January when Al Gore, not Dick Cheney, held the tie-breaking vote in the Senate. Daschle was able to forge a "groundbreaking power-sharing agreement" with Trent Lott which gave Democrats more clout on committees.

Now his political skills as a negotiator, consensus builder and communicator are about to be tested for real. And how well Daschle does will have major implications for the Democrats in Congress and for his own future.

Daschle will not only become the leader of the Senate, but the most powerful Democrat in the United States – and the on with a daily national podium at his disposal. Since the election, Democrats have been floundering and looking for a spokesperson. Clinton and Gore have both decided to maintain low profiles and Gore's advisors say that won't change any time soon.

Daschle's name has been in the mix as a possible presidential contender in 2004, and he has not denied interest. "I’ll defer that decision until after 2002," he said on May 20, when he just happened to be in Iowa, site of the first-in-the-nation presidential caucus, campaigning for Sen. Tom Harkin.

DASHPAC, his political fund-raising committee, contributed $429,100 to federal candidates in 2000. In addition, it gave money to 150 state and local candidates, including $15,000 to New Hampshire Gov. Jeanne Shaheen. During the April recess, after receiving raves from Common Cause for his leadership in the passage of McCain-Feingold, Daschle raised over $250,000 for senators up in 2002. On June 7, the Washington lobbyist community will be out in full force when Daschle hosts a $5,000 a person fund-raiser for his PAC.

"Up until now, the Democratic message has been almost exclusively 'no,'" says Daschle advisor Dunn. Now the Democrats and their leader have an opportunity to form and articulate their own agenda.

On Thursday, Daschle spoke to President Bush and talked cordially of bipartisanship. He also said that his next legislative priorities would be education and the patients' bill of rights. These are two top issues on the minds of the American people, but Daschle's vision of them is slightly different from Bush's. Those Republicans who are not too shell-shocked by this week's events are skeptical, but we'll know soon if that sweet talk that snowed Barbara Boxer will work its magic on the national stage.