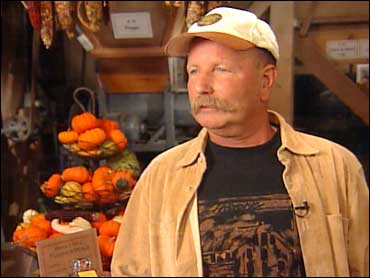 The time has come for The Early Show to begin its series "Tour My Town!"

Hundreds of entries poured in, including this one:

I am Debby Sodders from Greenville, Ohio, to tell you that my town is the home of Annie Oakley and my singing group, Melody Line.

Have you heard of Kitchen Aid mixers? They're made right here in Greenville. We are also the home of Maid Rite Sandwich Shop with gum stuck to the outside brick exterior.

"All of the customers coming here would just stop and put their gum on the wall on their way in," says Maid Rite managing partner, Steve Canter. "I try a couple times a year to take it down but it constantly comes back."

I'm Debby Sodders and welcome to my town: Greenville, Ohio!

Co-anchor Hannah Storm couldn't resist Sodders' invitation to visit this rural community in western Ohio. She says if you just look downtown, you'll see that people there want to preserve their past.

One man has spent 30 years keeping his nose to the grindstone, literally, which is how Terry Clark earned his title — "The Master Miller."

Clark may be the master miller now, but he sure didn't know much back in 1979.

"I didn't know the difference between white corn and yellow corn, except the color," he says.

And yet, he somehow convinced his wife they should buy Bear's Mill to save it from destruction. It's one of only 50 mills left in the country that is powered by water.

"We've been here 27 years and it's just a labor of love," he says. "The whole building comes alive when I turn the mill on, and the line shafts are working, and I'm grinding grain. There's certain sounds that you hear that the building, just comes alive."
The mill is full of history, and everything there is done the old-fashioned way.

"This is how the grain gets from first to fourth floor, cups and belts," Clark says.

His stone-ground products are offered for sale along with his wife's pottery. It's a living that suits him just fine.

"Our lifestyle here is different from anyone's," he says. "We generate our own electricity from the water power. We have a food source. We're Y2K ready if it ever happens."

It's important for Clark to preserve this way of life because he says he was once so destructive — he was 18 when he was sent to fight in Vietnam. On his property is a tribute he built in memory of local men who died in the war.

Even though many years have passed, he says it does not get less painful.

"I spent a year in Vietnam in 1967-68, and did a lot of things that I regret," he says. "And this is part of the payback — doing something, preserving something, since I destroyed so much. This is the payback." However, he says he will never be able to pay it all back.

Clark knows the value of his mill. He's been offered a lot of money to sell it.

"It was a couple of million dollars," he says. "(But) where else can we buy another mill? Money's not everything. I think it's a lifestyle, living in a historical piece of property and just good, hard work. And if you turn it over to someone, they might turn it into a disco."

Clark isn't the only one in Greenville struggling to hold on to history. Many wonder if strip-mall sprawl will overtake the heart of this town. No one says life here is perfect but, for many, it's pretty good as they look to their future while never forgetting their past.