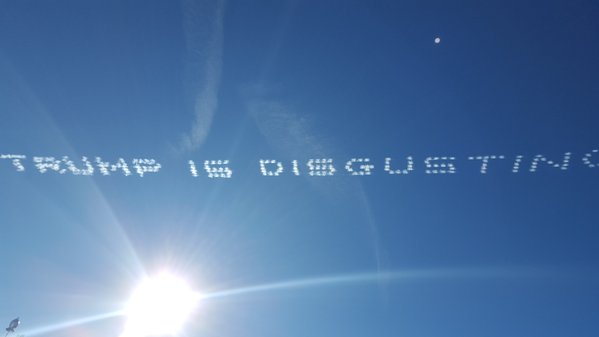 PASADENA -- A millionaire real estate developer -- who also happens to be a donor to Florida Sen. Marco Rubio's presidential campaign - is behind the aerial messages at the Rose Bowl calling GOP front-runner Donald Trump "disgusting" and he says that there's more to come. Much more.

"There's no place for him," said Stan Pate, from Alabama. "He needs to go back to one of his tall towers and build buildings and whatever else he does. He's a despicable man."

"I want to see America wake up and say this is not what we expect," he added.

Those hosting a tailgate party at the Rose Bowl on New Years Day might have been surprised to look up to the sky and see messages blasting Trump. Multiple planes spewed cloud-like messages castigating the GOP front-runner, such as "AMERICA IS GREAT, TRUMP IS DISGUSTING. ANYBODY BUT TRUMP." The messages quickly went viral on social media and created a buzz for those attending the 127th Rose Parade, the annual ritual on New Year's Day in Pasadena, California.

The messages' tagline was "anybodybuttrump.us," a barebones website belonging to a Tuscaloosa, Alabama-based group called the "We the People Foundation." The site is registered to Pate, who The Huntsville Times once referred to in a profile as "an edgy force in Alabama politics."

"This is not over," Pate told CBS News. "This is just beginning."

Pate said that he has bought similar, smaller banner ads at the Orange Bowl, the Cotton Bowl and the Sugar Bowl. AirSign, the Florida-based airborne ad firm contracted to fly the anti-Trump messages, confirmed the buys.

"He spews hate, not only on every candidate, he spews it on women, Latinos, Muslims and the list goes on," Pate said. "And it's just time we respond and say this is not what we expect out of a candidate running for president."

Pate has gone the aerial route before. He once flew a banner over the 2010 national college football championship saying, "IMPEACH CORRUPT ALABAMA GOVERNOR BOB RILEY." Riley was the state's governor from 2003 to 2011, and got on Pate's bad side once he pushed to raise taxes.

For 2016, Pate was an early donor to Rubio's campaign. According to FEC filings, Pate gave $5,200 to his presidential campaign committee in early 2015, but he says he's officially undecided. He's also donated to many other Republicans in the past. In 2004, Pate cut a $25,000 check to the Republican National Committee. Pate also contributed tens of thousands to joint fundraising committees supporting various Republican state parties in 2004 and again in 2008, also supporting Sen. John McCain's presidential run.

Pate has also donated to Democrats. In 2007, Pate donated $2,300 to the presidential campaigns of former senators John Edwards, of South Carolina, and Chris Dodd, of Connecticut.

But it is his aerial assault that his garnering him headlines - not his wallet.

The Rose Bowl has become an unexpected political hotbed - somewhat because of one of the game's participants hailing from an early nominating state. The super PAC supporting former Florida governor Jeb Bush's presidential campaign, Right To Rise USA, descended on Pasadena to set up a tent at an Iowa Hawkeye tailgate party. On Thursday, during the pre-Rose Bowl party aboard the USS Iowa, organizers handed out "Hawkeyes for Jeb" cozies and stickers to Iowa fans. The super PAC event had a custom Snapchat filter that displayed the same message. Democratic front-runner, former Secretary of State Hillary Clinton, Vermont Sen. Bernie Sanders and Rubio all will run commercials during the game on ESPN.

The Trump campaign did not respond to a request for comment.