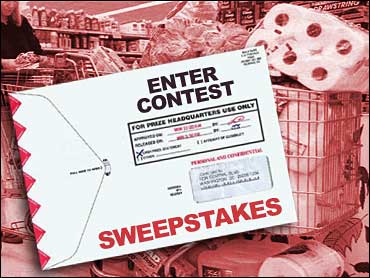 If you walk down the aisle of any supermarket you will probably notice a number of promotional contests and sweepstakes going on.

Most people just keep walking, but The Saturday Early Show's Debbye Turner has the story of a woman who has made a hobby out of winning those kinds of contests.

Many people don't enter contests because they just don't think that they'll ever win. But there's a grandmother in Illinois who knows better.

Though people line up waiting for her to sign her book, Carol Shaffer is an unlikely celebrity. She's a grandmother who lives in the small town of Columbia, Ill., and the author of "Contest Queen."

She says, "I've won trips all over the world, to Russia, China, to Australia. I won a car, a $10,000 shopping spree at an upscale mall in St. Louis. I've won seven televisions.

In all, Shaffer says that in the last seven years she's won 455 contests, and has taken home prizes worth more $150,000.

"And in my book I've given some of my strategies," she says.

For Shaffer entering contests is a passion. She got hooked after she won a $10,000 shopping spree in a local sweepstakes.

She says, "Then I entered a few more contests and I won a few. It's kind of addictive but I don't think that it hurts anybody."

For her, "contesting" is a hobby and she enters any kind of contest she can find, from sweepstakes, to essay contests, from senior beauty pageants to cooking contests. And for every contest, she has a strategy.

Shaffer says, "If I'm in a cooking contest - like, I won first prize with my cowgirl hat cookies - I dressed up in western attire, to draw attention to myself and then to my cookies. If I'm doing a Mexican cooking, I'll dress up in Mexican attire."

She won a chance to spend a day with Oprah by sending in a postcard that she knew would have appeal.

She recalls, "I sent a postcard in of Chicago's skyline. I know that Harpo Studios is in Chicago. I knew they've got a bin with all of these postcards. But my picture postcard is going to be different and stand out."

The majority of contests she enters are sweepstakes and write-in contests. She says she spends around 20 hours a week on her hobby.

She says she wins because of the volume of contests she enters and the different strategies she applies. "I've come up with these different techniques which enhance my chances of winning," she says.

Many of her techniques are designed to get her entries noticed, such as dyeing an entry-form with food coloring before submitting it.

Shaffer says, "Another technique I use is, I'll put 37 one sent stamps on an envelope and my reason for this is I hope it will get their attention."

This is all to make her entry stand out, and she says it makes a difference.

Shaffer says no matter how small the prize may be, winning is always a thrill. "When the phone rings, could this be something I've won? And it doesn't have to be a big thing, like winning a soccer ball. It's still fun. But there are contests everywhere. I went to visit my mother some time ago, where she's buried, and there was a contest to win a cemetery plot."

"I haven't heard if I won that," she says with laughter. And admits she may have crossed the line.

Shaffer's book, "Contest Queen" is full of her tips on how to win. People have asked her why she's willing to share her secrets, and she says that there are so many contests out there that she can't enter them all and she wants others to share in the fun.

Tips For The Perfect Grilled Steak