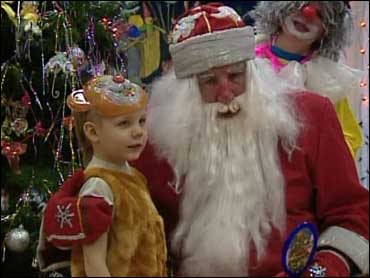 Ded Moroz is Russia's Father Frost, who brings presents on New Year's Eve. He looks a lot like his Western counterpart, minus the elves and reindeer - but the Russian government is serious about defending his turf, reports CBS News' Dave Grout in Moscow.

So serious that every December there's a three-week course called the Moscow School of Ded Moroz, which aims to establish norms for his role in the New Year holiday. It's offered for free at a government funded youth center. And who are the students?

They're mostly Moscow school teachers, raising their teaching qualifications and getting a certificate of professional achievement at the end.

Alexander Frolov is the director of the program. He's part history professor, part acting coach. So besides improving everyone's presentation skills, he also makes sure his class understands the story behind the myth.

"Ded Moroz is the wizard of New Year's" Frolov says. "His origins predate Christianity, as the pagan god of winter."

This might explain why Russian children are expected to perform for him - a poem, a song, even a play -- so the big guy in charge of the cold weather stays in good spirits. In turn, Ded Moroz entertains them with riddles, stories, and of course presents.

So a visit from Ded Moroz is a big deal, and Alexander Mokryshev wants to get it right.

"I still feel goose bumps every time I'm about to appear as Ded Moroz." he says. "It's a huge responsibility."

New Year's is Russia's most important holiday, and like most holidays in Russia, it's still celebrated under the watchful eye of the State.

In the early years of communism, Ded Moroz was banned - considered a bourgeois western influence.

Brought back by Stalin in the 1930s, Ded Moroz is once again the undisputed symbol of the Russian new year, although some Russians feel he's under attack again.

It could be new chapter in the Cold War. . .

Several Russian Web sites claim that Santa Claus is out to destroy Slavic culture. The authors are angered by imported toys marked Ded Moroz which actually depict Santa Claus, and call on Russians to engage in mild civil disobedience by defacing the label.

Why the backlash? Throughout history, Russia has both absorbed and rejected Western ideas. After decades of isolation, Russia was bombarded in the 1990's with Western culture. Nowadays society is seeking its own identity, turning to strong paternal images -- father figures like Peter the Great, President Putin, and the founder of Moscow, Yury Dolgorukii appearing this holiday season as Ded Moroz.

Despite the male domination, there's always a lead female role at the Russian New Year -- Snegurochka, granddaughter and traveling companion to Ded Moroz. Her character is uniquely Russian, so the school wants to make sure Snegurochka is played correctly.

When the class is over, there is a written as well as a practical exam. Then, they will put their new skills to work, and hundreds of Russian kids will get their holiday cheer courtesy of a government-certified Father Frost.