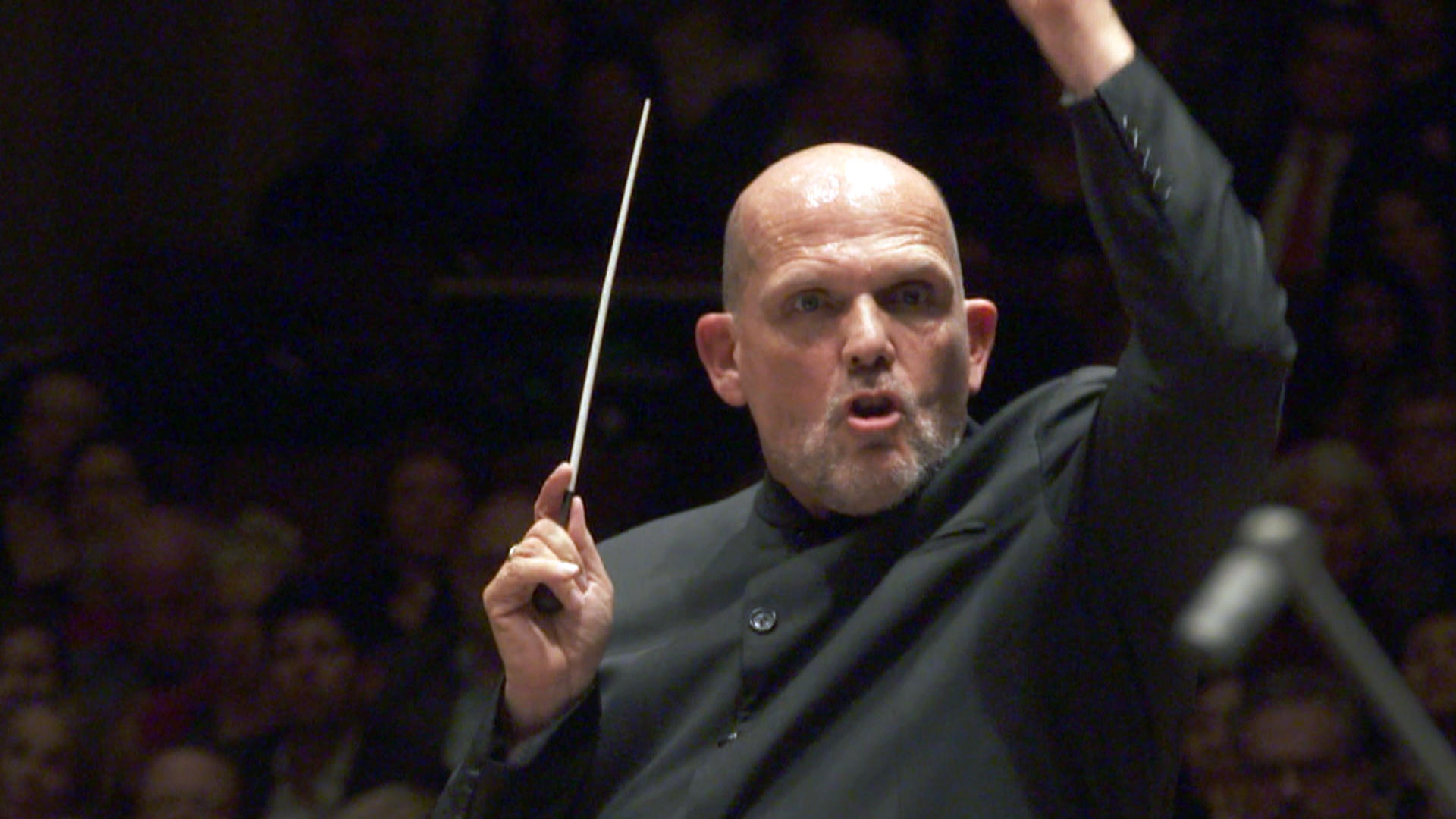 This fall marks the 177th season of a renowned American institution: the New York Philharmonic. It was the first symphony orchestra in North America, and is considered one of the finest in the world. Its conductors have included legends, Arturo Toscanini, Gustav Mahler and the most famous ever American maestro, Leonard Bernstein. So when its most recent conductor Alan Gilbert announced he would be departing, the world of classical music was abuzz. Who would be chosen to fill the most coveted orchestra post in the country?

The answer, a surprise pick, a Dutchman with a hard-to-pronounce name: Jaap van Zweden. Last month, New York audiences got a chance to meet the new maestro.

Lesley Stahl: In the beginning of this search for a new conductor, you weren't even on the list.

Lesley Stahl: Did you wanna be on the list?

Lesley Stahl: So what happened?

Jaap van Zweden: Well, I came and I-- I conducted them. And then suddenly they put me on the list.

In a world of maestros known for healthy egos and big personalities, 57-year-old Jaap van Zweden is no exception. With his intense focus, and some successful visits as a guest conductor, he managed to rise to the top of the list.

But what he walked into was far from perfect harmony. Huge budget deficits, organizational turmoil, and an aging hall in need of renovation.

A tall order for a man who grew up far from New York City, in Amsterdam. And who never dreamt of conducting.

Lesley Stahl: How many rooms up there?

Lesley Stahl: For how many people?

Jaap van Zweden: I would not say poor, but we had no money.

Jaap van Zweden: My mother had a little hair shop, very little. And my father was a piano teacher.

Lesley Stahl: So the music was in your house growing up.

Jaap van Zweden: Absolutely. And at the weekends, he played to make some extra money with gypsy violinists. And they would come to our little house, and rehearse there. And I told my father, "That's what I want to do."

Lesley Stahl: You told him?

Lesley Stahl: He didn't tell you?

And what Jaap wants, he goes after and tends to get. By eight he was performing, and a few years later, won a national competition with a full scholarship to Juilliard in New York City. He came on his own at 16, but he didn't stay long. The Dutch Royal Concertgebouw Orchestra invited him back home to assume the prestigious post of first violinist. He was just 19 years old.  He'd been back a year when he discovered something else he wanted.

Jaap van Zweden: I went to this dance place in Amsterdam, and I went inside.

He says he was mesmerized by a striking young woman on the dance floor.

Lesley Stahl: She really is across the room?

Jaap van Zweden: She's across the room. I never said hello, anything.

Lesley Stahl: Well, did you get to meet her that night?

Jaap van Zweden: Yes. And she was not interested at all.

Lesley Stahl: At all?

That girl, named Aaltje, remembers a persistent young man who told her something about being a musician, and offered to leave tickets for her and a friend to see a concert.

Aaltje van Zweden: This beautiful hall. So we were looking, and my friend and me were, like, "Wow, this is gorgeous." And then the concert started. And no Jaap. So we-- I said to my friend, "See, it's all a joke. I think he's working in the cloakroom."

Fortunately for Jaap, she stayed past the intermission, when he walked out onto the stage as the featured soloist.

Aaltje van Zweden: And I was, like, "Wow. This is unbelievable."

Jaap van Zweden: Actually I played so well this concerto at that-- at that day-- I really played for her. And I thought that will do it. But then I had to wait months and months. So it was not easy for me.

But he didn't have to wait too long; they were married in their early twenties. Jaap remained first violinist in Amsterdam for almost two decades as they started a family, and he played under world-renowned conductors like Leonard Bernstein -- Lenny to Jaap.  It was Bernstein, during a rehearsal at a newly renovated concert hall in Berlin, who inadvertently changed the course of Jaap's life.

Jaap van Zweden: He said to me-- you know, "This hall is refurbished, and I would like to sit in the hall.

Lesley Stahl: So he could hear the acoustics?

Jaap van Zweden: Yes. Would you mind just-- take over the rehearsal and conduct f-- for me the First Symphony of Mahler?" And I said, "But Lenny, I-- I never conduct--" "I cannot do it. I-- I never did that." He said, "Doesn't matter, just do it."

So he did, and Bernstein told him he was lousy.

Jaap van Zweden: And he was right.

Lesley Stahl: Was he right?

Jaap van Zweden: Yeah, of course. But he said, "Look, I saw something there. Take this very seriously. See how it is for you to start to conduct."

Conductors typically start young, but at age 38, Jaap took a wild leap. He gave up the violin entirely to try to become a conductor.

Lesley Stahl: Here you are, first violinist, in one of the best orchestras in the world.

Lesley Stahl: And somehow you put your violin down. And now you go down to the bottom--

Jaap van Zweden: To the bottom.

Lesley Stahl: --as a conductor.

Jaap van Zweden: Yes. The conducting actually grabbed me by the throat. And I could not resist.

He started conducting wherever he could, and within a decade had become chief conductor of the Dallas Symphony, where his work started attracting national attention.

Deborah Borda: The progress of the Dallas Symphony from when Jaap took over is almost unthinkable it's so great.

Deborah Borda, then-president of the Los Angeles Philharmonic, was impressed.

Deborah Borda: It was a regional orchestra, and now I'd say it's one of the really fine American symphonies.

Lesley Stahl: And he did that.

Deborah Borda: He did that single handedly.

So what's the secret? How does a conductor make an orchestra great?  Jaap says the real work is in the long, detail-rich hours of rehearsal.

Jaap in rehearsal: This is the moment that there should be a body language I think from the strings, like (sings). Can we just do that?

That's where his background as first violinist, borda says, sets him apart.

Deborah Borda: He knows the orchestra from the inside out. He communicates with each section, because they need very specific directions.

Jaap in rehearsal: Please horns and trumpets, (sings) That serves much better the music. Third horn..

Deborah Borda: This is what makes an orchestra fall in love with him.

Jaap in rehearsal: That's way too loud, and rushed.

Jaap in rehearsal: That is not together.

And in Dallas, some musicians complained to the newspaper.

Lesley Stahl: Tactics of fear. Over-demanding. You're-- you're too critical.

Jaap van Zweden: I still remember that there was somebody who said, "Yes, but I am afraid of you." I said, "No, you're not afraid of me. You are afraid of yourself. You did not prepare well, and then blame it on me." But, okay, you know, I-- I understand that we are all humans, and-- the best thing is to be as warm as possible.

Lesley Stahl: But you are warm. I've been with you for three days--

Jaap van Zweden: Yeah, but you did not play in my orchestra yet.

Lesley Stahl: No. (LAUGHTER) You won't be warm if I don't prepare.

Jaap's career has revolved around making music, but music has touched his personal life as well. His and Aaltje's third child, Benjamin, was diagnosed with autism so severe they were told he should be institutionalized.

Benjamin couldn't talk, but he loved hearing his parents sing to him. When one day they accidentally forgot a word to one of his favorite songs, he got upset.

Lesley Stahl: You didn't even know if he was understanding up to that point.

Aaltje van Zweden: No, we didn't have a clue.

Jaap van Zweden: But the interesting thing is that we repeated the song and then we left out again the same word. And then we actually put our hands in front of our mouth. And then he tried to remove the hand like this--

Jaap van Zweden: To have the word. And then we told him, "We will finish the song. But you have to tell--"

Jaap van Zweden: --the word, And finally after months, he said his first word.

Jaap van Zweden: And so but then we had the feeling now we got you. Because now we can leave out two words

Jaap van Zweden: This is Benjamin.

Today at 28, Benjamin not only talks -- he's even learned some English.

And he has close relationships with his whole family, including Jaap's father, who recently turned 90.

The Van Zwedens have created a foundation that offers music therapy to autistic children throughout the Netherlands, and provides a home for young adults with autism, where Benjamin now lives, as his parents spend more time in New York.

Lesley Stahl: Now you come here and see this.

As opening night approached, Jaap seemed excited by the challenge. And he has a new partner.

Lesley Stahl: All the orchestras are suffering in terms of audience, age of the audience.

Deborah Borda: Remember, orchestras are creatures of the 18th century. And here we are well into the 21st century, How do we take these orchestras and make them relevant to our time?

Well, marketing for starters, the New York Philharmonic is running sleek, hip TV ads to introduce its new maestro. And he has innovative plans to draw audiences in: new works by young composers; late-night concerts where people can listen to music over a glass of wine; and $5 dollar performances for New York City workers.

Lesley Stahl: Would you consider really good composers of-- of popular music for the symphony orchestra?

And he tossed out a few names that surprised us.

Jaap van Zweden: I would love to work with Pharrell. Lady Gaga.

Jaap van Zweden: Why not? Isn't she fantastic?

Look out, New York Philharmonic! Jaap has been spotted attending raves. Well, when his youngest son Alexander is the DJ. But we're not sure he'll be bringing that music to the concert hall anytime soon.

Jaap van Zweden: I don't know. Do you call that music? (LAUGH)

Jaap van Zweden: Yes. You know, you have these incredible beat. Bang, bang, bang, (LAUGH) bang. And I try to understand what is this. Maybe I'm a little bit too old for that.

So for opening night: Stravinsky. An intense close to a rousing debut for the latest in a long line of maestros to take the New York Philharmonic baton.

Jaap van Zweden: If you think about all the phenomenal-- conductors who were before me I just can be humble, because all those people were chosen and they proved that they were the right choice. And now it's my time to prove that I was the right choice.